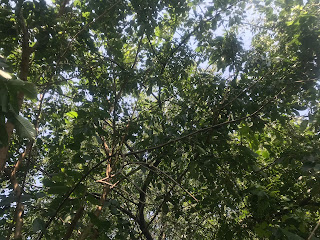 This would continue sporadically throughout the morning. Just as you thought he’d gone quiet he would pipe up again. Up high in the wild branches of G’s trees next door, we couldn’t see the source of the song.

Of course, there’s now an app that can recognize birdsong. I downloaded BirdNet, recorded a short segment, and uploaded it for analysis. Apparently those segments travel across to servers at Chemnitz University of Technology in Germany where they are compared with a growing database of millions of bird songs.

The answer came back: “white throated sparrow” (which goes by zonotrichia albicollis in Latin). Hardly exotic, therefore, but that distinctive song will probably stay with me forever, marking a period as the city was beginning to re-open from the pandemic. Our next door neighbor on the other side, T, said he had been hearing it every morning too.

I told P and Dad about the white throated sparrow and BirdNet via WhatsApp and it sparked a flurry of reminiscence about other birds in other places, and other people. I commented that Dad’s brother C, who loved birds and kept learning about them until he died much too young in his forties, would probably not have needed an App to identify the song.

“Yes, C had a ton of books on birds…”, Dad replied, “It was fun in Scotland [where they lived for a while as kids] looking for peregrine falcons and the occasional eagle. I was a bit fascinated by birds of prey.” To which P replied that where she lives, in the Swiss mountains, she loves it when the eagles fly close to the hotel and restaurant that she and her partner run in the Summers: “two of them live in the rocks just above.”

A stream of associations and connection assisted by technology and by the distinctive song of a white-throated sparrow.

It's impossible to quantify what having access to trees has meant this past year. Here's something JNH wrote recently:

"Whenever I go into my garden, and I hear the birds chriping and see the trees waving as if they're saying hi to me, I feel as if my garden is one being, shown to me through many others."