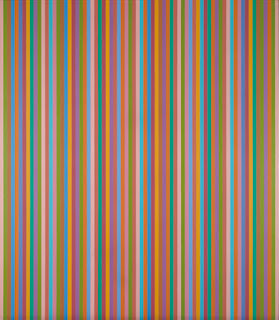 Through a random Twitter stream scroll I encountered a London Review of Books article by Bridget Riley on the process by which she developed her colored stripes paintings. I was in bed and sleepy, and it was only towards the end I realized it was written by her. Instead I read it somehow as an unknown artist’s reflections on their journey with lines and color relationships. Eliminating the fame made a difference.

I had been one of those people who responded to Bridget Riley’s paintings with “but it’s just stripes.” Now I get them.

My studies of the greys paved the way for the colour movement in Late Morning (1967-68). In that painting, I began in a very simple way to draw with colour. The blue to bright green movement is the form. At the core of colour lies a paradox. It is simultaneously one thing and several things – you can never see colour by itself, it is always affected by other colours.

You cannot deal with thought directly outside practice as a painter: ‘doing’ is essential in order to find out what form your thought takes.

This discovery-through-doing reminds me of the kids’ book “Andrew Drew and Drew” that follows a little boy as he populates blank pages with creatures that emerge from his imagination.

It also reminds me of JNH and CMH's prolific drawing and doodling. “This is heart rain.” “We’re playing ice hockey…”

The day after reading the article I happened to be wearing a new stripy dress. It’s a cotton Summer dress, in bold thin stripes of bright green, red, yellow and black. I was working near home that day, in the air-conditioned predictability of a Starbucks.

A disheveled man in his sixties who’s sometimes there working his way through piles and piles of documents with furled corners said as he walked past, “that’s a wonderful combination of colors." Or something along those lines.

With the sudden switch from work-mode to talking-with-stranger-mode, I came out with a rather odd response, “Thank you. Though it wasn’t me who designed it!” As if I wanted to correct him on misplaced praise.

That didn’t throw him off though, and he embarked on a story about Miles Davis. The man said he was once with a friend of a friend who had to pick up the jazz musician, and Miles was taking a long time coming down to the street so they went to see what was going on, and there he was, captivated by a small TV set. There was no show on though, just the bands of colors that used to appear when programming ended.

“Because they are always changing and always the same.”