Recently I read William H. Whyte’s “The Social Life of Small Urban Spaces.” It recounts the results of "The Street Life Project”, which he began in 1970. Over a period of three years Whyte and his researchers observed and filmed “16 plazas, 3 small parks, and a number of odds and ends" in New York City. They examined how people used those spaces, how long they stayed, where and how they sat. In essence they looked for what made a small urban space work (like sunlight, water that people can interact with, the presence of food vendors, openness to the street, moveable chairs) and what didn’t (such as the absence or opposites of those things).

The researchers’ persistence in promoting their results paid off when in 1975 the City Planning Commission incorporated their recommendations into a new open-space zoning code. Since 1961 developers had already been incentivized to provide public plaza space; they were permitted 10 more feet of commercial floor area for each square foot of plaza space that they provided. The 1975 changes required that those plazas be amenable to the public as well as simply existing. And it asked them to provide a sign informing people of how the plaza is amenable:

“A plaque or other permanent sign shall be displayed in a prominent location on any urban open space for which a bonus is granted. Such sign shall indicate number of trees, and number of movable chairs, and any other features whose listing may be required by the City Planning Commission, the name of the owner and whomever he has designated to maintain the urban open space.”

Now as I go around the city I keep noticing the public plazas ensconced between soaring office buildings, and their accompanying plaques. Like the plaza between 29 and 30th Streets near Sixth Avenue. Here’s its plaque: 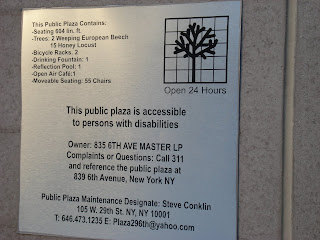 And the towering building that owns it, 835 Sixth Ave: 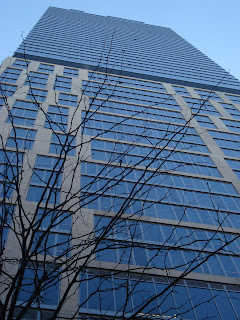 And one of the two “Weeping European Beeches,” next to the “reflecting pool.” 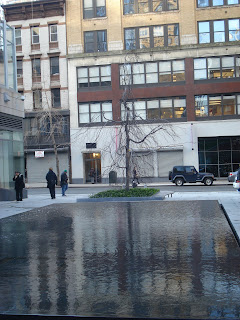 The style of Whyte’s book, while short and readable, seems a bit dated now in a 1980s textbook way (it was published in 1980). But the new plazas that appear with their shiny plaques are testament to the durability of his ideas. Human habits change little, it seems. If you observe them long and closely enough you will come to conclusions that stand the test of time.

Not that new additional features aren't introduced of course. The 385 Sixth Avenue plaza has a huge film screen on one wall that shows peaceful landscapes, or conceptual video art, or sports events in the summer time.
Posted by Annabel S at 6:54 PM No comments: