Everything is so fragile, including sleep. His sleep and ours, we never know how long it will last.

The little señor JNH came into the world early in the morning on Saturday 15 May 2010 at New York Downtown Hospital. There should be a verb for “born”. “Was born” is much too passive.

He opened his eyes just a few hours later. Bewildered, awed, he took in what he could make of his surroundings, slowly opening and closing his mouth at the same time. At that point his surroundings were only whatever was within 12 inches of his face. Over the next few months and years, that radius will reach further and further away.

I’m now savouring the moments of wonder and immersed in a milk production effort. More to come... 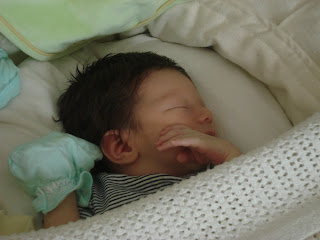 There’s a strip of gardens behind our house. Renting the third floor apartment means we don’t strictly have access to ours, though I’m sure we will be invited to invade from time to time by P and P who live downstairs. In the mornings the gardens fill with a mix of birdsongs that come through our window and call us out of sleep. But the gardens are surrounded by construction work. Every spare inch of Astoria, every foreclosed home, is soon colonized by a new identikit apartment block stretching as tall as permitted or a little bit taller and confronting the world with rows upon row of square eyes. So this morning, like many recent mornings, the birdsong was drowned at regular intervals by the growling of drills and thump of hammers. Tweet, tweet, peacefulness, grrrrrrr. Tweet, tweet chirrup. Grrrrrrrrr. Bang bang. Etc.

An elderly Italian man plants things in the garden. He’s not “a gardener” as such. Several years ago when P’s Dad, who owns the house, was living here, the man appeared on the doorstep and somehow they reached an agreement – despite P’s Greek Dad not speaking Italian and the man not speaking any Greek or English – that he could come and plant things, use part of the produce himself and leave the rest for the occupants of the house. He disappears in Winter but reappears most Summers to put in vegetables and tend to the fig tree. No-one who currently lives here knows his name - I’m looking forward to getting into the garden one day when he’s there to say hello.

It seems a dispute could be afoot though. P asked me the other day if I spoke Italian (I don’t), because of a potential misunderstanding with the garden man. P’s wife (also P) had planted some cucumbers, under little mounds. A few days later, she could swear the mounds had been meddled with. Sabotage? Then I had a dream. In it, I opened the blind in the morning to see a new fence dividing the garden length-wise in two, woman-P gardening on one side and garden-man on the other.
Posted by Annabel S at 8:32 AM No comments:

New York missive no 69 - What language to write about New York?

Pregnant women here have so many sonograms that by the end of a pregnancy you have a sporadic visual history of the baby’s development in the womb. But it’s still a pretty sketchy history. The images are blotchy and blurry with dark undefined areas, let alone the dark areas between each sonogram, when who knows what’s going on in there. A hidden cauldron where a life is being made. Thankfully large amounts of mystery are retained.

As for the sonograms, you can compare them to works by different artists .

Then there was a Chagall, a swirly figure surrounded by floating bits.

At twenty weeks, a 3D sonogram that looked like an illustration from Grimms Fairy Tales. A cheeky, rather distorted-looking face peering out of a shadowy forest.

Then a “growth scan” last week that was a Picasso. This time he was hiding his face in his hands and the detail was hard to make out, so what we saw were bits of body at jaunty angles: ribs, a femur, a hand.

Anytime from now to three week’s time he’ll be making his entrance. He’ll shake off those paintings and become rather more real. 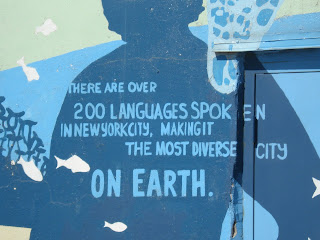 At Coney Island the other day I took a picture of a mural that says, “There are over 200 languages spoken in New York City, making it the most diverse city on Earth.” A wonderful New York Times article recently said there are many more – up to 800. Many are “endangered” languages spoken by only a handful of people in the world and that may not be known by any in a few generations’ time. The article describes how the Endangered Language Alliance is seeking out and recording them, using field techniques “usually employed in exotic and remote foreign locales as it starts its research in the city’s vibrant ethnic enclaves.” Among them are Vlashki, a variant of Istro-Romanian, Garifuna, Mamuju, Aramaic, Chaldic, Bukhari, Chamorro and Irish Gaelic.

The evening that article came out, C, L and I went to “New York Stories,” four authors talking at Morgan Library about writing about New York City as part of the PEN World Voices festival. The most refreshing voice there was the Catalán writer Quim Monzó. There was a strange sense of déjà vu or repetition among what the other writers said about the city. Perhaps because they were talking about writers - as well as their own writing – who had a somewhat privileged perspective on the city (even if not all their characters did). Colm Tóibín (who we’d heard reading from his fabulous novel "Brooklyn" a few weeks back in the rather different setting of the Poisson Rouge in Bleeker Street) spoke about Henry James. Roxana Robinson about Edith Wharton. And Darryl Pinckney about Elizabeth Hardwick. Maybe it was also because they were writers in English talking about other writers in English. Monzó writes in Catalán. His refreshing perspective included a challenge to "street-name fetishism". Why, he wondered, do New York novels obsess that such-and-such event happened on "Fifth Avenue" or "the corner of 14th and Greenwich," as if to infuse the event with stolen geographical gravitas?

It made me think too much writing about New York repeats the same themes. There is the potential for a kaleidoscopic diversity of perspectives that is unrealized when the dominant writing on New York is in English. Someone with time on their hands could create a literary map of the city linking to works about it in its hundreds of languages (with English translations?!).

The following Sunday the language theme came up again at an interview with Ariel Dorfman – also a PEN World Voices event, this time down at the Museum of Jewish Heritage in Battery Park. Dorfman is completely bi-lingual in Spanish and English. He gave the example of the first sentence of his autobiography "Heading South, Looking North" to illustrate the ways in which languages express life in unique ways. What you can say in one simply can’t be said, or can’t be said via the same route, in another. He wrote the memoir in English first. In English, the first sentence reads, “"I should not be here to tell this story." Meaning that had he chosen, as he initially intended to do, to stay in Chile after Pinochet’s coup rather than become an exile, he would have been killed along with fellow members of Allende’s government. When it came to translating the autobiography into Spanish he grappled for several weeks with that one opening sentence. And he realized that in Spanish, a person, a “someone”, who died in his place had to be present in the sentence. “Si estoy contando esta historia, si la puedo contar, as porque alguien, muchos años atrás en Santiago de Chile, murió en mi lugar."

Some other wonderful nuggets from that dense hour-long conversation, not all directly language-related even though language permeates them:

- The English language is going to have to become more “Latin American”, in the sense of incorporating external influences and not remaining entirely itself.

- The US has many narratives, but you can simplify them into a “dark” and a “light” narrative.

- Dorfman’s wary of questions of identity because they often become questions of exclusivity. True. You could say, “hold on, isn't his whole life and work inevitably grappling with questions of identity?” But instead he has made an entirely conscious decision to embrace a notion of humanity that rises above (or flows below) identity. One that is empowered by human rights.

- During the Q and A, a woman in the audience confessed to having a martini beforehand – surely more than one it seemed. Then she proceeded with a rambling and vulnerably star-struck question about political fiction and her own project to write about Lynndie England, the US soldier now serving time for her role in the atrocities at Abu Ghraib. Dorfman, while encouraging her, said that in fiction characters have to have autonomy. If you have decided in advance what you (narrator) want to say politically then the characters are not free to speak for themselves, and it’s best to avoid literature altogether.

- Dorfman cited Margaret Atwood who disagrees that writing literature “reveals” the author. Instead, she believes, people write to hide.


Back to languages and the city for a moment. The proliferation of languages can be alienating, of course. In a local Queens newspaper a Flushing resident said he wished that the Chinese language signs on the shops were also in English, because he feels disorientated in his neighbourhood. And a recent article in the Village Voice describes the chasm of misunderstanding between Chinese, Dominican and hipster residents in a Delancey building. 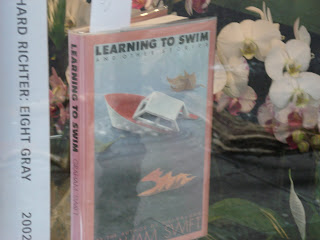 I read Graham Swift’s inspiring short story “Learning to Swim” recently. In it a young boy breaks free from his silently feuding parents’ crushing competition for his love. (I seem to be drawn towards stories with parenting in them at the moment). Then when I was picking my way through tall bunches of blossom stacked outside flower stores on 28th Street on my way to work, I caught a glimpse through a shop window of a first edition of Swift's collection named after that story. Cities, with their densely-layered lives, are webs of echoes like that.

On the crowded 1-2-3 subway platform at 42nd Street an elderly man plucked a black plastic sack out of the bottom of a bin to put his possessions in. A uniformed MTA woman who was going round emptying the bins had a go at him. “Why you stealing all my bags?” she shouted. He protested gently that he hadn’t stolen all of them. We got into the same train carriage as him, where there were lots of nurses in their green scrubs. “Can you tell me why they’re kicking the patients out of all the hospitals?” he asked the nurses. “Every hospital I pass has a sign saying, ‘Out patients’”. The nurses didn’t reply. I thought it was rather funny.
Posted by Annabel S at 8:21 AM No comments: