New York missive no 87 - Out of the ordinary 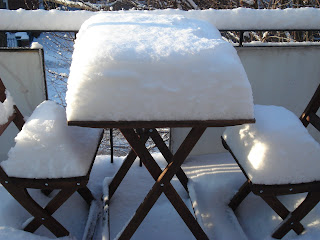 The white of snow brings out dark lines that in other weather go ignored. 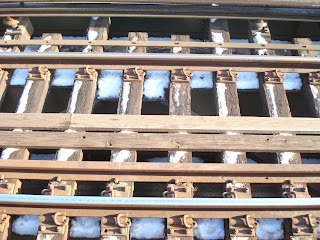 I knew early on that my journey to work last Thursday would be different than usual. Walking along 30th Drive towards the 30th Ave subway station, first I saw a tiny dead mouse on the sidewalk. It was smaller than my thumb and looked like it had been frozen by the cold.

Then I saw a dog doing an orange poop. (The dog had positioned itself on the grassy verge in such a way that you couldn’t help but see what it was up to). The poop wasn’t orange in a normal way. It had swirls of fluorescent plasticy-orange like the jackets of track maintenance people. I got to the station, and learned that there were no trains running from 30th Ave to Manhattan because of an “incident” at Queensboro Plaza.

So I walked down to Queensboro Bridge and over the river. Walking across that bridge is always a bit thrilling. It’s thrilling because the bridge soars high above East River, its thick steel girders reaching to Manhattan which is, of course, center of the universe. But the thrill is qualified by a “bit”, because the thick steel girders and a mesh fence stop you from seeing much of the river below except in glimpses. And your walk is accompanied by the roar of traffic.

For me, the bridge now always makes me think of being driven across it in a taxi, in labour with JNH. I was being whisked towards an experience I knew would change my life, change “me”, for ever. It was good to revive that vivid memory unexpectedly on a diverted Thursday morning journey to work.
Posted by Annabel S at 5:59 PM No comments: 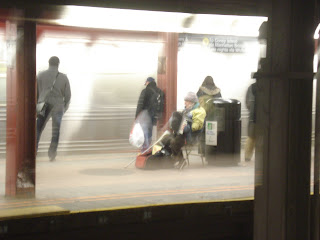 Most people in the New York City subway system are moving. Even when they’re standing on a platform waiting for a train they fidget, peering down the tracks as if to lure the train into the station. When it arrives, on they get and off they go to their next destination. But there are some people who do not move. You could call them fixtures.

On the NQR southbound track at 34th Street station there is the man who sits on a box at the bottom of a pillar and plays his accordion. I see him when I’m waiting for my train on the other side of the track. He plays classic melodies. La Vie en Rose, Lara's Theme. If you close your eyes you could be on the South Bank in Paris, just about.

On the NQR northbound track at 34th Street station there is the black guy with his possessions in plastic sacks piled high in a shopping trolley. He occupies the end seat on one of the wooden benches at the northern end of the platform.

Occupies, that is, until one day when I saw that a Navajo Indian had taken his spot. The new occupant had a sign, “Navajo Indian. Trying to get back to Arizona. Please help.” He was gazing into the distance and held out a little Dunkin’ Donuts plastic cup. The first day I saw him there I put a dollar in the cup. His eyes sparked up and he opened his gold-filling filled mouth to say “god bless you” before gazing back into space again. Who knows if he is really trying to get back to Arizona, but I felt motivated to give him the dollar.

The second day I saw him there, the black guy with the shopping trolley came down onto the platform. He looked distraught when he saw somebody else in his seat. He leaned against a nearby garbage bin, his trolley and bags gathered around him. And there he was, leaning against the garbage bin, when my train arrived, on I got and off I went.
Posted by Annabel S at 6:30 AM 2 comments: 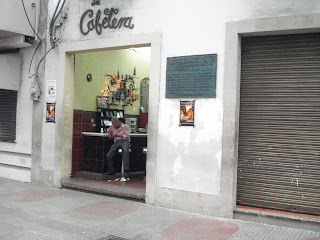 Well, so much to write and not the time to write it in.

Briefly, new year’s resolutions include: interviewing people in my neighborhood for a new website I’ve set up www.30thAve.org, taking JNH swimming, and doing a bit of yoga and running (no over-commitments there!).

It’s funny looking at my list of “40 before 40”, half-way down this post, to check how I’m doing with six more years to go. I’ll do a line-by-line report sometime soon. But to summarize, I’m making inroads. That's strangely without trying to, or taking the list seriously at all. As if it was more premonition than to-do list (ok, not the novel-writing bit).

We spent Christmas and New Year in the Dominican Republic with C’s sister D. Two selected highlights: visiting the municipal cemetery in Santiago where C’s mum is buried; and the discovery and purchase of a painting of a “Gallo Loco” by Miguel Ulloa in the village of Guyacanes.

In the cemetery, I remembered the many times I’d wandered as a tourist around cemeteries in Latin America, and looked at the names in the stacked niches. And here I was visiting the grave of my mother-in-law, with the grandson she never knew snoozing in a papoose on my chest. D had lost the key to the padlock on the niche grate, so the flower vases inside were empty and there was a lot of dust. But a man who worked at the cemetery tipped a few buckets of water over to clean it up. And as always when visiting a grave it was the moment that mattered rather than the physical thing. The fact that here we were, C, D, JNH and I, pausing together in our lives to think about E.

On our way out, D and her friend R who was also with us came across the graves of other people they had known. “Mira, aquí está tal-y-tal….y aquí su esposa…etc”.

Racial lines are accentuated everywhere in DR, it seems. In the car parks in Santo Domingo, the people leaving their cars were light-skinned, the people minding them were dark-skinned. In the resort, most of the guests were pale-skinned, all the staff were dark. JNH was much admired by everyone – would he have been so much if he didn’t have a whiteish complexion and blue eyes? The obsession with paleness seems a bit ironic given that white people haven’t exactly had a history of benevolence on the island. As C pointed out, much of it comes from a superiority complex over Haitians, as well as advertising influences from allá.

I was struck by hearing "allá" in DR understood instinctively to mean the US, while among Dominicans in New York of course allá is DR. It's as if the actual allá isn't in either place, but somewhere in-between.

When the 33 Chilean miners were extracted from their 69-day burial they were wearing Oakley sunglasses. Oakley had donated them, to protect the miners’ from the glare. They were going to need them.
Posted by Annabel S at 7:43 PM No comments: