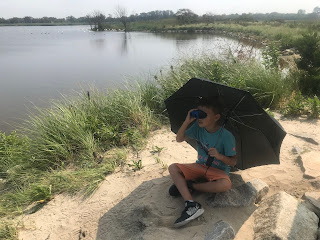 I’d long wanted to go to the wildlife refuge in Jamaica Bay, and we finally went there at the height of August, on a bus through Maspeth, Ridgewood, Glendale, Woodhaven and Ozone Park. The place is beautiful but August is not the best month to go. At the center of the expansive bay, and sheltered from the Atlantic by the Rockaway Peninsula, the refuge is watery, windswept, and a stop-over place for flocks of seabirds on their long migrations. As it’s close to JFK there would usually be planes thundering low overhead too, but this being Corona-time, there were hardly any.

It could have been peaceful. But as soon as we set off along one of the tracks we were rudely reminded that August is peak bug season. We didn’t have bug spray, and quickly our sweaty bare legs and arms lured fat mosquitos from all around, and hornet-y things came careening up to us. Had there been other people around we would have been a ridiculous sight, dodging out of the way of insects, actually running at times, while swatting ourselves with one hand and carrying umbrellas with the other to keep off the glaring sun. The pandemic’s accentuated (as it has everything) our interconnectedness with nature and the fact we meddle with it at our own peril. The Jamaica Bay trip was a close-to-home example of nature saying it's better off without us.

Fast-forward to December, and there was a heavy snowfall the week before Christmas. CMH’s soccer club went ahead anyway with their Friday evening practice. So CMH and I found ourselves arriving at Astoria Park running track (the football field is in the middle of the running track) to see it transformed into an other-worldly scene, the whole area a swathe of shimmering snow under floodlights. In the far corner of the field, 15 or so other little players and their parents had also shown up and were using shovels to dig a pitch out of the snow. We tramped/floated over to them like astronauts and joined in. Once the pitch was created the kids played the beautiful game, while the parents moved their feet and clapped gloved hands to keep warm, and right there you had the resilience of all the people of this city who have been finding ways to keep themselves and others together. 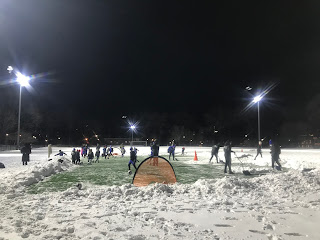 Since reading Tanizaki’s In Praise of Shadows a while back I had lost touch with the concept of “wabi sabi”. Then I reconnected with it again when I came across an article about wabi sabi in architecture. It’s one of those terms whose meaning is nestled so securely in its original language and application, in this case Japanese, that much gets lost in translation. From what I’ve read I’m taking it to mean simplicity (not shallow, but deep simplicity), combined with the beauty that objects acquire over time with use. Perhaps the most wabi sabi object we have is the saucepan that C’s mom used to use, with gentle dents in its matte surface from much stirring over the years.

I imagine wabi sabi can apply to relationships as well as material things. The way that they are formed by accumulated moments and focused interaction – the times that, for example, C has bought me a new item of clothing having spotted I need it and realized I wouldn’t get round to doing so myself, or rubbed my feet at the end of the day, or said something that makes me realize he knows me even better than I do myself (which is often). The way that relationships acquire completely unique markers, and yes, blemishes and imperfections, all of which are infused with an inner light that makes them whole.