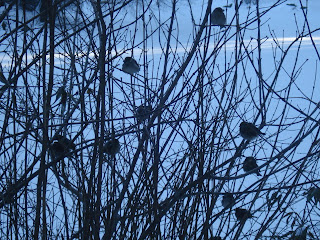 I choose my own tributaries. In a world of seemingly endless sources of information (seemingly being the operative word), that strikes me as the most practical approach. At least, it’s the only way to make some sense of it all and weave a narrative. We all do that to some extent of course, even if the tributaries sometimes bring surprises. Thank god they do.

Given the quiet, incessant choosing and filtering, references that seem to be coincidences but in fact are nothing of the sort arise. One example from yesterday: the artist Jacob Lawrence popped up twice. In the afternoon, at an exhibition on the Apollo Theater at the Museum of the City of New York, a description panel included an image from one of Lawrence's Migration Series paintings. Then in the evening as I fed JNH listening to the radio my wonderful former journalism teacher Hariett Gilbert referred to him, during an episode of the BBC program The Strand.

One of the things on my 40 before 40 list was to learn about and make maps. I’m making a gentle start. I'm channeling some map-related sources into my life and finding that I’m holding on to random references to maps as I come across them.

I devoured Peter Turchi’s Maps of the Imagination: The Writer as Cartographer on my subway journeys to work. About which more in a later post when I’ve had a chance to digest it properly. (In the meantime, just “a magnificent book”).

A couple of recently-encountered quotes:

“This is a deep and mysterious happiness, to confirm the accuracy of a map.” Don DeLillo, in his short story Human Moments in World War III.

“More delicate than the historians' are the map-makers' colors.” The last line of Elizabeth Bishop’s poem The Map. Of course the whole poem is about a map but that line bowled me over.

And I’d had the idea, before JNH was born, to decorate a wall of his room with maps. Then I realized that it would look rather pretentious and ridiculous in a baby’s room and not be much fun for him at all. (Instead there are black and white stencils of a boy sitting in the moon blowing bubbles, some animals and a quirky tree). Maybe when he’s older.

In the meantime he does now possess a special map. His baptism present from m and d was a 1799 wooden puzzle of the "Post Roads of England & Wales", passed down through m's family for 8 generations to arrive, for now, with JHH.

On Friday C and I saw three girls leaping in excitement on Steinway Street just south of 30th Ave waving a big Egyptian flag. We walked further up the street to see what was going on in “little Egypt”. It was a few hours after Mubarak stepped down. The street was surprisingly quiet, perhaps because of prayer time or work or both. But that image of the three girls with the flag was plenty to stay with me. A real-life image to accompany those rolling across the TV screens.

Today JNH went on a swing for the first time. We were in the playground on 45th Street near 30th Ave, which still had un-melted snow on the ground. That’s another image that will stay will me. His big two-toothed grin framed by the blue of his snow-coat, swinging forward and back, forward and back.
Posted by Annabel S at 5:49 PM No comments: