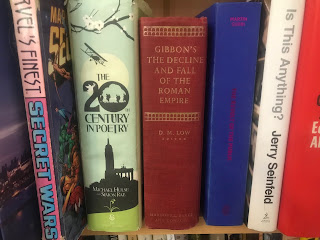 There you have it. So much of what you love about a person condensed into a little moment.

C was cooking spaghetti and meatballs for our supper. He sang one of his invented ditties – this one about “spicy meatballs” – the kind of song that you really wouldn’t sing around anyone except close family, then came across to me picking up off the table his red hardback copy of Edward Gibbon's “The Decline and Fall of the Roman Empire” (plucked at some point from a bookshelf at my parents’ house), flipping through it to show me that he’s almost at the end, having reached the chapter called “The Seige of Constantinople”. Head a bit tilted back, wearing his glasses, celebrating the book, that’s my life partner right there.