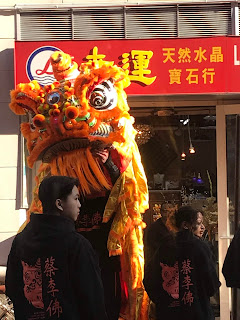 Recently I caught up with JQ. She said that returning to New York after a year in Berlin and Budapest reminded her how deeply she loves this city. It struck her particularly on a visit to Chinatown. I too had had a similar reminder in Chinatown, when I took the boys there for the Luna new year celebrations. As my schedule’s more flexible for now (oh yeah!) I can make the most of days like that, when they are off school. We got the train down to Sara D Roosevelt Park where the firecracker ceremony was happening.

Then we found a little girl who had lost her mother. Tears ran down her face. Everyone was just continuing on their way around her, oblivious to the fact she was on her own. We tried talking with her, but she only understood Chinese. I lifted her up high to see if she could see her mother in the crowd, but no sign. A woman who did speak Chinese came and helped us. We began to head towards the stage to ask for an announcement to be made, when the mother came running up to us, hugged the girl with tears and relief, and all was well.

It’s the year of the pig. The boys talked me in to buying a pig each: bright red, round, squishy ones decorated with Chinese flowers. In that unpredictable way that toys do, they have turned out to be hits. Both sleep with them each night (with a group of other carefully selected animals), and JNH’s joins us when we’re watching TV.

Homewards through Little Italy. Though I’d given up hope of seeing dragons in action, suddenly there they were on a side-street, leaping and glaring to the accompaniment of cymbals and falling streamers in the evening sun: I was taken right back to my 10th birthday party in London’s chinatown, where the dragons frightened little sister P. 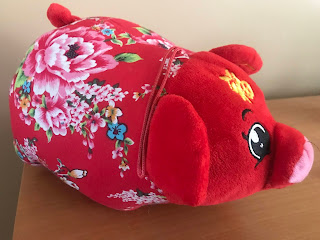