New York missive no 90 - Naming colours, and Astoria Park on a grey morning 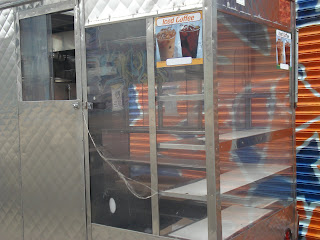 One day I was getting on the downtown 1 train at 59th Street when a young Chinese girl asked if I could help her name a colour. She was clutching a large board. It had scraps of different coloured material and paper stuck onto it. Rather desperately, she said “excuse me, but what name do you give this colour?” I paused then offered “ivory".

“Good, ivory," she said, and wrote it on the board. We got on the train. She sat next to me, and for the next few stops we worked through the rest of her colours. Some were easier than others. There was “baby blue”, “mauve“ and "black”. We both got off at 28th Street: she was headed to the Fashion Institute of Technology where presumably her colour-naming would be put to the test.

The day before JNH’s birthday I took him for an early morning stroll around Astoria Park (pre mum and baby music class). There was a slate sky and the East River was still. A black and white tugboat slid down it pulling a nondescript cargo. The arch of Hell Gate Bridge was reflected in the river to form an open mouth – leading to the winding throat of the Hudson if you were approaching (as I was) from the South, and to the clanging city and out to sea if you were approaching from the North.

It reminded me of a passage I’d just read in Italo Calvino’s Invisible Cities. The passage describes the city of “Despina," that can be reached by ship or by camel. When a camel driver approaches, he sees the shape of the city with its skyscrapers, radar antennae, wind-socks flapping and “chimneys belching smoke” as a ship. “…[H]e thinks of it as a vessel that will take him away from the desert, a windjammer about to cast off…”

When the sailor approaches, he “knows it is a city, but he thinks of it as a camel from whose pack hang wine-skins and bags of candied fruit, date wine, tobacco leaves, and already he sees himself at the head of a long caravan taking him away from the desert of the sea…”

The book pushes its idea a bit too far. It describes many, many incarnations of cities to drive home the point that cities have the same contents – it’s the angle they are viewed from that changes and changes them, like a kaleidoscope. But it has some gems, like this paragraph that I pounced on and tripled-lined in the margin. It captures what I’m trying to get at with my 30th Ave website:

‘But which is the stone that supports the bridge?’ Kublai Khan asks.

‘The bridge is not supported by one stone or another,’ Marco answers, ‘but by the line of the arch that they form.’

Kublai Khan remains silent, reflecting. Then he adds: ‘Why do you speak to me of the stones? It is only the arch that matters to me’

Polo answers: ‘Without stones there is no arch.'"
Posted by Annabel S at 7:20 PM No comments: 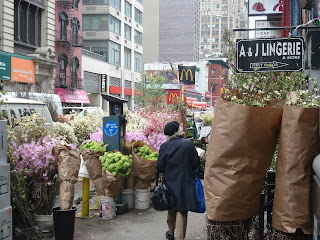 Walking down 28th Street to work I pass a little door sign to "A & J Lingerie", with in smaller font beneath it "and more".

The lingerie shop is tucked in among flower shops (this is 28th Street after all). So the sidewalk in front of it is festooned with blossoms. The blossoms are an appropriate preface to the lingerie, with their delicate petals in pastel colours. 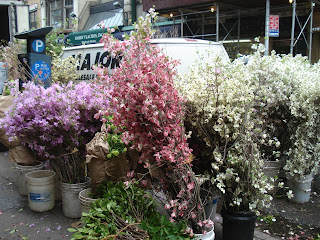 On a rather different note, last night Obama announced that US forces have killed Osama bin Laden in Pakistan. He was buried at sea. During the day I've had two competing scenes switching back and forth in my mind. The technicolor cheering and chatting on TV screens cuts to a dark underwater silence where Osama's body drifts among fish.
Posted by Annabel S at 6:41 PM No comments: