One of the (many) things I love about having a kid is the random things that pop up around the place. Like today I realized I was carrying a blue felt drumstick along the street. And sometimes ducks appear in the kitchen. JNH has a set of rubber ducks – red, blue, green and yellow. Even though he only really plays with them in the bath somehow they manage to find their way out. So I might find a red duck on the kitchen table with the food. And once the green duck made it outside in JNH's stroller till he dropped it. We walked back down the street a bit to fetch it: it looked very forlorn and out of place there in the middle of the gray sidewalk.

I was asked the other day if we had been taught anything about the American Revolution at High School in England. We weren't. It was a reminder of the skewed and dishonest portrayal of history that most kids are given. And it made me wonder, where can you find a realistic high school education in history, and what would it look like?

Last Monday I was engrossed in Crossing the Boulevard on my subway ride to work on the N train. The book is full of the stories of immigrants living in Queens. It conveys their experience through a beautiful combination of their words, and photographs of them and of objects that have played an important part in their lives. I had the book open at a page with a large photograph of Sultana Wakili, a woman from Afghanistan who had come to the US recently to join her daughter. It’s tempting to tell her whole story, but buy the book if you want to find it out – along with many, many other unforgettable stories. Talking of the ideal history lesson, this book would be a good place to start.

The woman sitting next to me on the train said, “excuse me, who is this lady?”, pointing at the photograph. I explained. She went on to show me what she was reading – a book of biographies of Jewish Nobel Prize-winners, in Russian. She said that she had bought it in a store in Brooklyn and that maybe they would also have copies in English. “I like history,” she said, and went on to say that in Ukraine, where she is from, she was a history teacher. She mentioned that Kiev is over 2000 years old.

She (I never discovered her name) won the green card lottery and came to the US in 1992. First, when she had no English at all, she worked as a nanny. Now that she speaks some English she works in a post office in Manhattan, carrying on her English studies from 6-9 in the evenings. Her subway stop was approaching. She said thanks again for showing me the book and added, “the lady is very beautiful, for that race.” Once a book like Crossing the Boulevard is released it can continue to inform and influence attitudes if not change them in all kinds of ways.

She said that encounters like ours on the train made her happy. “When you have a conversation like this on a Monday, it’s going to be a good week!” and she was on her way.

Hurricane Irene has been and gone. She was more tropical storm than hurricane by the time she hit New York. On Saturday there was plenty of pre-disaster capitalism on show as queues of people (ourselves included) hit the shops to stock up on essentials like water…and whiskey. Booze sales definitely got a boost this weekend.

I’d been wondering if we should sleep in our kitchen, in the middle of the apartment, to avoid any flying glass if the beloved pear tree fell. But we all slept like babies through the night in our usual places, lulled by the sound of wind and rain, and woke to an Astoria that was ruffled but not battered.
Posted by Annabel S at 6:47 PM 1 comment: 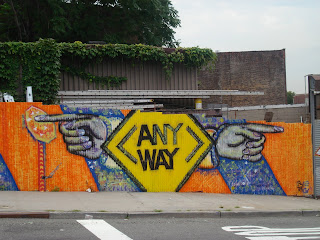 New murals have sprung up all around the Western end of Astoria's 30th Ave, the second phase of the Welling Court Mural Project. This is one of them.

One of the most creative people I have ever come across is a man who set up his home on the corner of Sixth Avenue and 28th Street in Manhattan. Some days I walk that way to work, some days not. Each time I passed his abode of boxes something new was going on with it. Once, there was a small pink stroller perched there with a “For sale” sign. Another time, one of the assorted collection of objects on display was a Beatles LP record with a note, “You don’t have to be English to love the Beatles.”

I rarely saw the man himself, an elderly white man. Sometimes a cardboard roof covered all the boxes and I presumed he was asleep inside. Other days, the whole home was exposed but its inhabitant was nowhere to be seen.

Then one day only fragments of the home were there, a few scattered boxes. The next, there was no sign of it at all. I felt like the space where he had been was a wound on the sidewalk. It may be over sentimental, but I really felt like the destruction, removal, whatever it was, of that man’s sidewalk home was a blow to New York and to spontaneity and other things.

Last Thursday on my way to work suddenly the home was there again. It was as if nothing had happened, except for a certain fingers-up bravado in its appearance. A large, closed umbrella stuck out from one corner. Elegant branches were propped along one wall suggesting a well-trimmed privet hedge in the suburbs. And the whole thing was festooned with American flags. There must have been ten of them.

On my way back to the subway station the man was there, standing up inside his home with a row of second hand books spread out in front of him along the sidewalk, and a bucket full of rose petals. “I’m glad to see you back,” I said. It was the first time I’d spoken to him.

“Come here, come here”, he said with startling enthusiasm. He beckoned and held out the bucket of rose petals and told me to take one. A plastic cup containing notes and coins was next to him. I took a rose petal and gave him 25 cents, in retrospect very stingy of me. What’s a fair price for a rose petal?