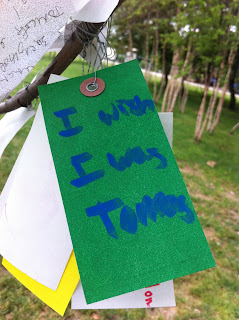 A wish from a wish tree in Socrates Sculpture Park

I’ve recently stumbled across points people have made about attention, and how it is a neglected value. It was the focus of a commencement address by author Jonathan Safran Foer. He describes how he saw a teenage girl crying into her phone saying “I know, I know, I know…Mama, I know,” and how burying himself in his own smartphone made the option of not intervening a lot easier. He goes on to quote Simone Weil - “Attention is the rarest and purest form of generosity” – and says, “By this definition, our relationships to the world, and to one another, and to ourselves, are becoming increasingly miserly.”

Then I read the obituary of a priest who had pretty much spent his life giving attention to people who needed it. He had said his work was “heaven on the way to heaven.” (I'm not considering becoming a priest to find out).

And then an extract from the commencement address by Cory Booker, the mayor of Newark. He talks about how he had always passed a group of kids in the lobby of his building and sometimes hung out with them. One of them stood out as being like his father, for his “quick wit, that great swagger.” Later as he campaigned for mayor and during his first months in office he had less time to spend with them. After coming home from a murder scene at which, as mayor, he had talked about the need to rally to fight crime, he read through the day’s incident reports on his blackberry and only then realized that the victim had been that boy on the stairwell who reminded him of his Dad. “As you put your sights on your goals…” he said, “don’t forget what is right in front of you today.”

I just realized that all of those three pieces were from the New York Times. That’s shocking. Time to diversify reading material. Though recently I’ve been trying to read more fiction than news.

Speaking of attention, being in the presence of young children forces it to some extent. One of my most memorable times last weekend was with JNH, closely following a small bee as it moved from clover flower to clover flower in Astoria Park.

Two more wishes from that tree in Socrates Sculpture Park: 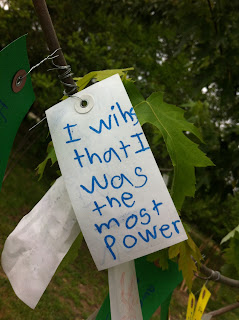 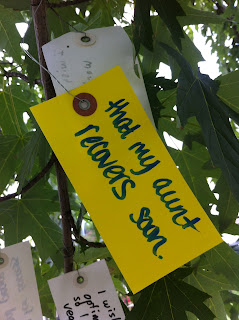