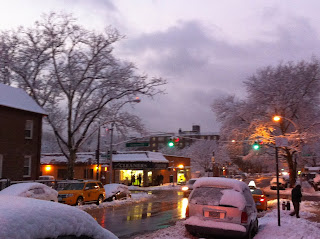 Astoria in the snow, not on the same evening described below, but another one some weeks later

On 2 January we arrive back at JFK in a snowstorm. It is around 8pm. For the swirling flakes and the dark we can’t see the ground until we are about two feet (so it seems) above it, then after landing the wheels spin and slide and other jets loom beside us as the pilot navigates to the terminal. Then there's the taxi ride back home to Astoria along the Grand Central Parkway, driving at 10mph (so it seems) on the icy roads. CMH on knee and sleepy JNH beside me, I am full of that travelling-mother-near-end-of-journey feeling that I always have on that taxi ride even in normal weather, heart in throat just in case now, as a trip is almost over, something happens. Imagination heightened by tiredness. C will tell me afterwards that he loved that particular ride. The driver has “1010 wins” playing. That’s the radio station C’s Dad always listened to in his taxi. No doubt there is the familiarity too of New York in the snow, of blizzards past.

Such a different ride to the one a week earlier from the airport in Santo Domingo. It is my parents’ first visit there. We emerge out of customs into an airport hall brimming with people waiting for relatives, among them tía D who JNH leaps up to hug, to my relief given that despite many skype-calls he hasn’t seen her in person for over a year. The seven of us – three generations – cram with too much luggage into a taxi that seems it might collapse, windows down to catch a breeze as we drive along the sea to the city, merengue blasting, and stopping for a minute to dig out the cooler that has got buried at our feet and crack open beers, “No really, beer right now?” says Mum, then “Oh alright, go on then.”