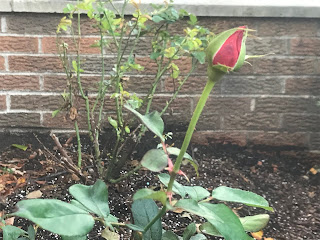 I’ve never been so happy to see a rosebud.

Through these months of having a smaller radius of existence the roses of Astoria, which come out around April, have taken on extra meaning.

When the video of the killing of George Floyd came out, their beauty was jarring. At the time I wrote:

Until he breathes no more.

Through the Summer, I would often walk around the block before the kids woke up, looping back up along a stretch of 36th Street. There are roses all along that stretch, where each building has a small garden in front, and I would pause to watch their poses, tilting against walls or just growing upwards, bobbing gently on the end of their stems. Solidarity roses, and roses in abundant clusters. (Now that the kids are back at school after the Summer but virtually, all four of us walk that block together after breakfast, as a pretend “walk to school”).

Back in August I decided to try planting roses of our own in front of the house. Off I went on one of my infrequent missions to Home Depot on Northern Boulevard. I walked back with two little rose bushes in our maroon laundry cart. The laundry cart drives home for me the incongruity of having a house (albeit mostly still owned by the bank) and not a car. It means we don’t use the cart for laundry because we have a washing machine, but that we do use it as a surrogate car whenever we have to move more than we can carry by hand. It came in very handy in the depths of the pandemic when we’d venture out, masked and gloved-up, to stock up on food for multiple days rather than our usual daily food shopping.

So there I am, wheels rattling along the sidewalks, thorny branches sticking out. Back at home I start working on the holes to plant them, which means moving the garbage bins around to the side. I soon had doubts, and that defeating feeling of not being able to do something that you were hoping to do and that felt important. The ground was dry, hard, and stony. Worse than that, the evergreen shrub in front of where I was digging had a thick patchwork of spindly roots, so dense that it started to feel ridiculous trying to dig through them. How was a rose bush going to survive, let alone thrive, here?

I wiggled and dug and shook out the dry mud till two shallow holes began to appear. I tipped some potting soil around them to raise the surrounding ground and make them seem deeper.

“You want to do planting in ‘R’ months”, said neighbor M from two doors along, who misses nothing.

“Months with R in them. March, April, September, October. Not November or December of course, but those middle months that have an R.”

It was the last week in August.

Doubting the holes were deep enough but not being able to get any further, I lowered the rose bushes in and packed them tightly with soil. Each time I came in and out of the house I checked up on them, and watered them most days. They looked decidedly shaky, and took it in turns to have their leaves get black spots. Then a bud appeared on the bush furthest from the door. Now each time I passed I willed the bud to still be there, and to open. Red petals began peeking through. It opened out into a fully formed rose. 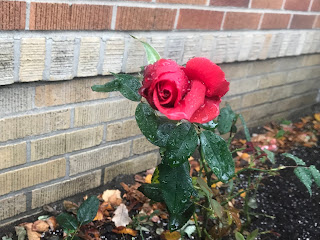 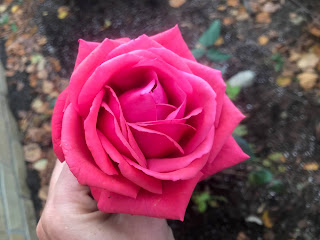