I passed a man on the corner of 6th Ave and 31st street, gazing up at a point in the sky a couple of blocks South. Then I realized that he wasn’t gazing up at the sky. (Of course not. Who looks at the sky in Manhattan?). He was looking up a towering new block of apartments. A Manhattan experience, gazing upwards, dreaming you can be higher. When you reach the top of one of those buildings though, don’t you feel a bit removed from the life going on so far below?

At the International Diamond Conference on Thursday Peter Singer said that stealing is a crime unless, for example, you’re stealing millions in oil profits from Angola or Equatorial Guinea. By chance in the subway on my way home I overheard a Polish guy say to the woman sitting next to him, “In America if you steal a loaf of bread you’re a thief. If you’re a corporation stealing a few hundred thousand here and there you get away with it. You can pay for the lawyers to get you off the hook.”

A huge bee careened into our living room a few weeks ago, black and bigger than a hornet. It crashed drunkenly into walls and the ceiling then the bars of a hanging metal lamp. C was trying to hit it with a rolled magazine and for some reason my fear was more intense than with any normal bee. This one was huge. And the presence of little J on the floor nearby further jangled my nerves. Each time C thwacked and hit the metal but missed the bee I felt its anger grow and imagined a deadly sting. Then it committed suicide. It flew into the glass bowl lamp on the kitchen ceiling and whirled there buzzing, buzzing until frazzled it lay still. You could see the black shape up through the clouded glass, a smudge. Yesterday I happened to look up at the lamp and it was gone. C told me he’d taken it out when he changed the bulb. I felt sad, like I’d missed something, the chance to see that great bee right up close and not be afraid.

In this interview with Charlie Rose, the journalist Anna Qindlan says of her youth, “I wasn’t sure if I wanted to have kids, which shows how much I know.”
“Because…?” asks Charlie Rose.
“Because they’ve taught me about ninety percent of what I know that’s worth knowing.”
After these five months of being a mother I know just what she means.

I copied a friend's idea and took a series of photos on my way into work to post on Facebook. The process of taking the pictures made me notice so much more than usual, of course. So now on my journey in I try to remember to photograph the things I see, even if only in my mind. 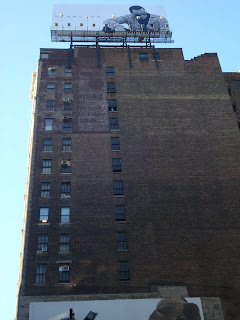 A woman looks out over midtown.
Posted by Annabel S at 6:19 PM No comments:

I’ve watched three episodes of the CBS TV series “Undercover boss”. No more! At first it seems a good idea. CEO gets to work undercover in different roles throughout his company to experience what his/her employees have to do and is humbled in the process – by his/her own ineptitude (which makes for good humor) and the tough work for little pay that the employees do (which makes for good pathos). Every CEO should be required to do that, just not for a reality TV show.

I've seen the episodes in which the CEOs of 1-800 flowers, Choice Hotels and Great Wolf Lodge indoor waterpark company go through the process. By the second, it became apparent that the show is completely formulaic. (Ok, the fact an American reality show is formulaic really shouldn’t come as a surprise). Boss gets to work alongside selected employees who are all hard-working, excellent at their jobs and struggling to realize their dreams – which might be putting their kids through college, getting a promotion, affording a too long-postponed knee operation. Boss is inspired by them. In weepy asides to the camera he admits his shortcomings and resolves to be better in the future. At the end of the show, boss reveals true identity to employees and individually “grants” them their dreams – a pay-rise, a higher position, more time to spend with their kids, a bonus to pay for the knee operation. At which point the employees are overwhelmed with relief and gratitude, often breaking down and crying.

Formulaic format aside, the problem with Undercover Boss is that it plays on exploited workers to make tear-jerking TV. You can just imagine the programmers scouting employees for the show thinking “great, a Mexican immigrant who has held down two full-time jobs for ten years to pay for his kids education. And he's still smiling." "Fabulous, a woman who has thrown herself into her work since the death of her nine-year-old daughter in a car accident – working alongside her will make the CEO realize how little she appreciates and spends time with her own children, providing for some good, emotional drama” (that was in the Great Wolf Lodge episode).

In a grand finale all the firm’s staff are gathered together to watch excepts of the CEO’s undercover experience. The camera pans back over the joyful faces of the selected employees. I couldn’t help but think if it wasn’t for this reality TV show their lives would be just the same as before. And for each of them, there are millions of workers who haven’t got chosen for a show so are still holding down the two jobs, unable to fix an injury, or having to choose between getting enough food on the table for their kids and spending any time with them. Undercover boss makes all that into entertainment.
Posted by Annabel S at 5:25 AM No comments:

Yesterday C, JNH, W and I strolled around Harlem looking at art. Like the SONYA art stroll in Fort Greene last year, the Harlem Art Walking Tour involved artists opening up the galleries, apartments, and beautiful brownstones where they work to visitors. As before, the buildings and their occupants were as intriguing as the art: it’s a wonderful way to explore behind normally-closed front doors. Interior worlds are exposed to the outside for a day.

This is the painting that C and I would love to buy if we win the lottery - by an artist called Brian Patrick Kelly (it's huge but somehow I can only get the pic to appear tiny here which doesn't begin to do it justice, though it's bigger at this link): 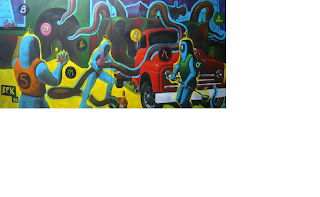 There was another I loved too, by a woman who squeezes thirty or forty hours a week of painting round the edges of her full time job as an army engineer. Angered by the gulf oil spill, she had used olive oil and paint to create a canvas of swirling blackish blue.

The art was followed by feeding JNH in Marcus Garvey Park, then feeding ourselves on heaps of soul food at Sylvia’s off 125th Street. I had smothered chicken. I wondered briefly if the name is a reference to the way the chicken is killed - but no, it's just that it's smothered in gravy.

I recently went through and tagged this blog with placenames, the purpose being to create a kind of personal geography of the city. I’ve tried to be strict with myself, street names and district names only. No landmarks, venues or other buildings to avoid too much clutter.
Posted by Annabel S at 7:47 PM No comments: