No rushing in NYC at the moment. It’s too hot. This weekend everyone’s been longing for a thunderstorm that hasn’t yet come. In the meantime the heat is building, building, pushing into people’s heads and making them oh so slow and sleepy. Of course that doesn’t stop them doing things, just makes them do them at a more considered pace.
I spent yesterday morning with kids from Abyssinian House, a transitional shelter on 138th Street in Harlem. It has brightly coloured murals that soften the blows of tough times, a bit. Sh, who organized the morning, had planned an Olympics theme – reading about the Games in the air-conditioned library nearby, then going to the park to for a mini Olympics and medal ceremony. We cut out the park part though because it was just too hot to be running around.

There was J, whose Mum came too. She’s Scicilian-Irish-American. His Dad’s Jamaican and was deported to Jamaica a few years ago so now it’s just the two of them. His Mum missed watching the Tour de France this year as she hasn’t had access to cable. She used to watch it with J’s Dad who’s a passionate cyclist, and she had endless stories about the trials and tribulations of previous races – I realised how a long-distance bike ride can in fact be exciting. J is beautiful from inheriting all the best features of his mixed parentage and grandparentage. He’s a voracious reader. Mum described how once, while she was working with PSEG when they were remediating sites in New Jersey, J, then seven, got into conversation with the geologists, jaw-dropping them with his smart words and questions.

There were the mischievous girl twins with near-identical names. I tried teaching one of them to write the word MARATHON, which proved ambitiously long. We got there though – albeit in a muddled two-letter-per-line pattern filling the page, with some of the characters lopsided.

There was C the funky puertorriqueño who slipped effortlessly from Spanish to English. Back in Abyssinian House and after our lunch of cheese and ham sandwiches, chocolate cookies and watermelon, he wrote a story about his trip to the dentist. He’d called the dentist rabbit woman because of her buck teeth, had got scared when she started treating him and ran away, “through the rainforest." But rabbit woman ran after and gave him a toothbrush to take away. Moral of the story, he announced, “don’t judge people by appearances.” And there was born-to-act M who had seemed shy all morning then had us in stitches with his “shower dancing” sketch about a boy who loved dancing to MC Hammer’s U Can’t Touch This and Michael Jackson’s Thriller in the shower, to the annoyance of his family members queuing at the door.

Then back to Weehawken Street for a rooftop barbeque, a swan-song as Sa described it because in a fortnight’s time I’m moving to Morningside Heights. Lots of beers, burgers, too much salad that didn’t get eaten, then a sweaty boogie at Cielo. And now time for a long sleep – up really early tomorrow to interview the first four of our Ukraine candidates. 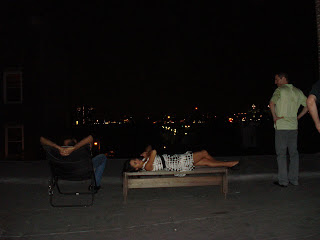 A July Friday night in the meatpacking district: to be witnessed, enjoyed, and not taken seriously. I found myself on the Soho House roof again – S had been invited by someone through work. More than the previous time the roof oozed attitude. Women still in their bikinis from the afternoon’s poolside sizzling purred beside men in jackets and chinos. The air was zig-zagged by gazes hunting out someone better to talk too. We downed our Margaritas then explored the rest of the building. In the 6th floor lounge, we had a second extravagant Margarita. A girl and three guys discussed the plots of crime shorts on the cluster of velvety sofas next to ours. One of their girlfriends sat beautifully and bored on a chair behind them, gazing out of the window, sipping a glass of red wine, glancing from time to time at a book on her lap and at her phone for messages. A few floors further down we snuck into the cinema and rather randomly watched Hancock, the new Will Smith film.

Then we escaped. Perched on the concrete slabs positioned for posing in the middle of the cobble Gansevoort-9th Ave intersection we watched a procession of open-roof sports cars rev by, got chatting to a physiotherapist and his patient who were on a date of some kind, and a pair of fabulous fifty-year old women down from Westchester Country with their well maintained manes and trim figures (one’s a personal trainer), glowing with the energy of a night on the tiles. Their eyes widened when we told them where we’d just been. S had the bright idea of giving them our pass. Say you’re A and S and friends of Charles blah-de-blah, and you’ll be in. The next thing we knew they were texting us from the rooftop, their night out made.

Tom Wolfe’s article in New York about its former editor, Clay Felker, who died the previous week, described a man obsessed by status. Does status still seduce in New York? In places like Soho House perhaps yes, where a combination of connections and cash (or in the case of S’s guy, more dubious means, he implied) is what gets you a membership. But status seems to be loosing its lustre. Not that I can talk from experience. People can’t resist aspiring to it but on arrival, mirage-like, it’s disappointingly empty, easy and fragile, quite capable of disappearing overnight with a quiver in the market, a negative headline, the discovery of an infidelity. And for most people in the city there’s no time to think about it. Instead there's ambition, whether to get a pay rise, find a better apartment, fall in love, make a bigger profit, write a bestseller, be content.
Posted by Annabel S at 7:56 PM No comments:

Last Sunday the tighter, brighter and more minimal the attire the better for Gay Pride. A day when heterosexuals are a minority. I didn’t see the parade itself but caught its before and aftermath. The previous night, slender male bikinied bodies erected white screens on the brick wall at the corner of Weehawken Street where they projected florescent visuals. The next morning, expectant mixed-age crowds lined the length of Christopher Street, penned in to an extent by police barriers. Old women perched on deckchairs, selling rainbow flags for waving. Then on the way back later that night the street heaved with a headiness enhanced by the torrential storm that had drenched the procession at around 5 in the afternoon. Coming down through Chelsea I passed a many-kiloed man whose T-shirt, stretched over his rolls, said “fat and sexy”. It was true. It’s a day when everything and everyone is sexy. A pair of black transvestites in skimpy floaty things swung up the drunken street making everyone else’s get-ups look tame. A group of friends sitting on a West Village stoop – usually the territory of the occasional pampered pooch or heeled and handbagged Jessica Parker aspirant – dialled a friend on a cellphone then shouted down it in unison “Happy priiiiiiide”. When I reached my doorstep, standing on it was a giant of a man wearing nothing but a red G-string.

“The train, the subway station? It’s just here,” I took a guess.

I thought a moment. “Oh, the Paaaath train.” His eyes widened with a mix of relief and surprise and I suddenly felt very conscious of my long a’d English accent just as I’d been conscious of not understanding his. Here were two people in New York but definitely not yet New Yorkers finding a way to communicate with each other.

I told him it’s a few blocks down on the right. We walked along the road next to each other, half-talking half-staying separate like strangers as we weaved in and out of the huddles that are always on the pavements outside the bars. I imagined him having just emerged in New York off a plane from India, heading through New York to New Jersey to be met by relatives, experiencing that giddying sensation of arriving in a city you’ve built such clear pictures of and which on arrival presents bits of those pictures but tricks you with how utterly different it is to them, so much closer. “You just arrived in New York?” I asked.

I went into a corner shop to buy a banana and pointed him to the Path stop that was just half a block further down. When I came out of the shop, he was waiting outside looking agitated. “I can’t find it.”

I was beginning to wonder if in fact the Path stop had suddenly disappeared overnight. But no, there it was, the old stone doorway and stairwell leading down to the trains. Off he went.

Sailing last Saturday. This time with Dutchman Mic rather than with B, who was having the day off to play softball – and with J and D from the previous week. In the morning there was a steady wind and bright sunshine. (I got burnt, lobster style. Attempted to tone down the red traffic light effect with some makeup that evening when I went to M’s leaving do in Hell’s Kitchen – she’s been re-located back to Seattle. I decided, however, just to rely on the darkness of the bar to disguise the large bruises on both my knees from bumping around in boats).

By the afternoon the strong tidal currents had picked up and the wind had died. Not a good combination. We drifted steadily Northwards and found ourselves having to paddle some of the way back, dragging ourselves up the Western edge of the river. Then lots of boat-towing and manoeuvring as NYCSA is shifting the Solings over to some moorings round the corner from the marina because it’s cheaper. There’s something melancholic about the fact that that the Solings – that people actually sail – are being shunted out to make way for yet more fibreglass monsters of motorboats that never move because their owners, having splashed out on a boat, don’t take it anywhere either because they can’t afford the astronomical fuel costs or they’re too afraid of damaging it. Then, when we were in the bay tying up the Solings, a torrential thunderstorm. The kind that soaks you to the skin in seconds. Exhilarating. To top it, a perfect rainbow arched its way over the whole of Manhattan. The illusory pots of gold were at the Northern and Southern tips of the island.
Posted by Annabel S at 3:05 PM No comments: