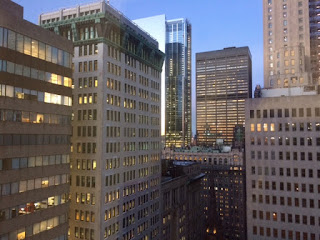 Many years ago I wrote a very bad poem, about the raw materials of a city separating into their constituent parts and being sucked up into a swirling mass of metals, sand, woodchips and water drops above the land, before falling back down into place again exactly as they were before. Exactly as they were – walls, windows, buildings, streets – yet changed from the experience: is this the same city as before, or a new one? I wonder where that image came from? The idea was more powerful in my mind than I could convey it in words. We are also particles in that swirling mass and that’s where our energy comes from, yet all the beauty and meaning in our existence comes from the ways in which the particles are placed in relation to each other. Shapes, boundaries, beginnings and endings, arrivals and departures that create meaning and narrative from nothing, like language.

This reminds me of a story I remember from childhood. After he retired, my Great Uncle Arthur taught reading and writing to kids who needed extra help with it. There was one child who just didn’t seem to get it. He struggled and struggled over the words and never retained how to read them. Finally, Uncle Arthur realized what the problem was. The child was looking at the spaces between the words, instead of focusing on the black lines on the page. Along with that memory comes, of course, the place where he told me that story: their quiet dining room in their flat in Connaught Square where Arthur would add slabs of butter to his toast, and where they usually served sweetcorn with the salad for lunch.

We can look at the substance of things and people but there’s also meaning to be explored and discovered (however difficult!) in the spaces in-between.

“I could tell you how many steps make up the streets rising like stairways, and the degree of the arcades’ curves, and what kind of zinc scales cover the roofs; but I already know this would be the same as telling you nothing. The city does not consist of this, but of relationships between the measurements of its space and the events of its past: the height of a lamppost and the distance from the ground of a hanged usurper’s swaying feet; the line strung from the lamppost to the railing opposite and the festoons that decorate the course of the queen’s nuptial procession; the height of that railing and the leap of the adulterer who climbed over it at dawn; the tilt of a guttering and a cat’s progress along it as he slips into the same window….”