You rarely hear the word “person” unless one is missing.

There are flyers all over New York at the moment for the missing person Avonte Oquendo. He is 14 and disappeared after leaving his Long Island City school on 4 October. He’s particularly vulnerable because he is autistic and mute. Seeing his face floating on those flyers is a reminder of the tragedy of his and his family’s situation, and also of the terribly thin line between being with those you love and losing them. Inevitably parents everywhere are imagining this happening to them.

JNH usually asks for water soon after he has gone to bed. The other night I went in to his room to give it to him and he told me, sounding intrigued, “Mummy, someone’s having a bath. I can hear someone having a bath.” I had been running water for a bath. For a moment I thought how wonderful to be a child and fill your mind as you are falling asleep by the fact that you can hear someone running a bath. So little thought-clutter! Then I realized that it shouldn’t be difficult to pay attention to the sound of running water for a bath, or any other everyday sound. We’re perfectly free to do so if we choose.

On another night when I took him the water to drink, a wonderful phrase – more like a pronouncement: “Mummy, water and agua are not the same.”

This is the seventh and last part of my essay "Thank You Conrad Manuel Hiraldo." Introduction and part one. Part two. Part three. Part four. Part five. Part six. 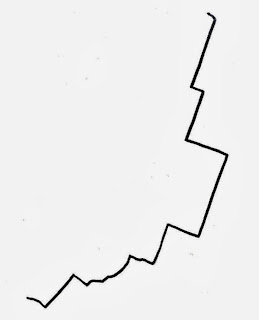 The Monday before I go back to work is a clear blue-skied day. The rest of the week is gray and wet, so this turns out to be the last of our September excursions together through the city. Conrad and I take the newly-reopened East River ferry from Long Island City to DUMBO. Another acronym; this one stands for Down Under the Manhattan Bridge Overpass. It was once an area where sailors, prostitutes, street gangs and writers who thrive off such environments or financially have no choice but to live there crammed into late-night bars.

Now it is the scene of arty brunch venues and the expensive River Café. A restored carousel by the water’s edge transports exited children on painted horses as their parents watch them come around, trying to catch their passing smiles on camera. There is the clanking of Cat diggers and thud of trucks behind a placard promising “Pier 5 – Picnic Peninsula.”

We climb up to Brooklyn Heights Promenade. The stately townhouses look just as they did when they were built in the nineteenth century. It was at 110 Columbia Heights, backing onto the promenade, that Hart Crane worked on his poem The Bridge. He wrote a letter to his grandmother describing the neighborhood as a “magnificent place to live”, with its sweeping views of Brooklyn Bridge, Manhattan’s new skyscrapers and the endless to-and-fro of boats. A world apart from the slums of the Lower East Side just the other side of the river.

“I dated her for a couple of years…she wrote this great memoir,” says a well-dressed man to his female companion as we pass them in nearby Cobble Hill. Lived Brooklyn is infused with literary Brooklyn. Along Court Street I browse briefly in the Court Bookshop, where flyers announce upcoming readings. I buy a ham and cheese sandwich at D’Amico, an Italian deli where hessian sacks of coffee beans line one wall, filling the air with their aroma. I stuff the sandwich into my bag for later and keep on walking South. I am thinking that Conrad might wake up soon, that I should find a place to feed him then hop on the subway home, but he keeps on sleeping and I keep on walking, and resolve to make it down to Red Hook. We navigate a noisy narrow overpass across the traffic of the Gowanus Expressway, named after the canal renowned for its fetid contents. Through Coffey Park, where groups of people huddle talking, down Van Brunt Street with its crop of new cafés, around past Sunny’s Bar that teeters in its isolation, and to the sea. Not long after this walk hurricane Sandy will rip through the area.

I find a bench in a small park overlooking the water. It is surrounded by plants, and while I am aware of two men on another bench further along the path from us it feels as if we are alone. Somewhere nearby, shrouds clang against masts. Seagulls cry, a factory hums. A huge cargo ship – Saudi Diriyah says the name on the side – is reversing towards the shore, towards us. Its loading ramp is raised at the back, a vast rectangle of metal slanting up towards the sky. The ship seems to come dangerously close. The water must be deep here, where the East River fills into the expanse of the sea. The ship stalls. Then it gradually pulls away and embarks on its course to its next destination, bearing its cargo and invisible crew.

Conrad wakes up. I have my sandwich, he has his milk. I respect him for waiting, as if he wanted us to reach this point for our stop.