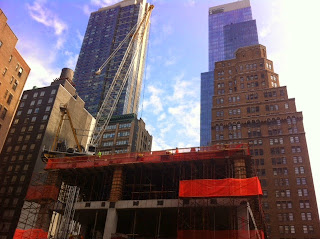 There is a skyscraper going up on the North East corner of Sixth Avenue and 30th Street. A notice says that the planned completion date is April 2016. One would have thought that conveys time's sprawl. So many months! Instead, the construction seems to have the opposite effect, when I walk past each day on my way to work. It contracts time.

I can’t remember what was there before the building site, what was torn down. But I do remember when the foundation pit was a gaping square hole in the ground (reminiscent of others). I remember when hoardings went up around it, so you could only see the site by peering through diamond-shaped holes cut out of the splintery timber, when the cranes arrived (“New York Crane & Equipment Corp”), then when the second floor rose up above the hoardings bringing workers with their yellow hats up into view from the sidewalk.

So many phases, so much time, but I know that one day I will be walking by the completed tower, observing the stores that occupy the ground floor, then craning my neck up, up, to its top, surrounded by all the other skyscrapers it has joined there. The whole thing may as well have happened in the blink of an eye.