The day in November 2009 when we came apartment-hunting in Astoria was gray. We saw two places, the second of which is where we live now, about which more below. Then I decided I wanted to check out the nearest park. We took the least scenic route. We walked up 31st Street under the elevated subway track – an oxymoron, but so it is – then went left along Astoria Boulevard with its roaring traffic and gloomy new apartment buildings that offer luxury but convey nothing of the sort.

We reached the Southern edge of Astoria Park, and then the running track at the foot of the towering Triborough Bridge. As far as I remember there was no-one running. Luckily the grayness wasn’t enough to deter us from moving here. It was such a different scene to the one recently, three and a bit years later, albeit in just the same spot by the running track. The sun was shining and the track, by now so familiar, was busy, though no-one was taking the running too seriously as this was mid-morning on a Sunday. JNH, who will turn three in May, asked C to run with him and off they went jogging around the track while I watched, holding 10-month-old CMH.

I was struck by the randomness with which a place becomes known so intimately. What if we hadn’t come to Astoria that day in November? (C had emailed me in the morning saying “what about Astoria, check out these links on Craigslist.”) Would it still have become home? Would the stretch of shops between Crescent and 30th Ave subway station, for example, be unknown to me, rather than sunk into my memory – however long we end up staying here – as the place we walked every day when my children were young?

The apartment we chose is in a semi-detached three story-house, so our building has six units. In many ways its dynamics are typical of Astoria. There is a mix of newcomers and old timers. (Click pic to read it): 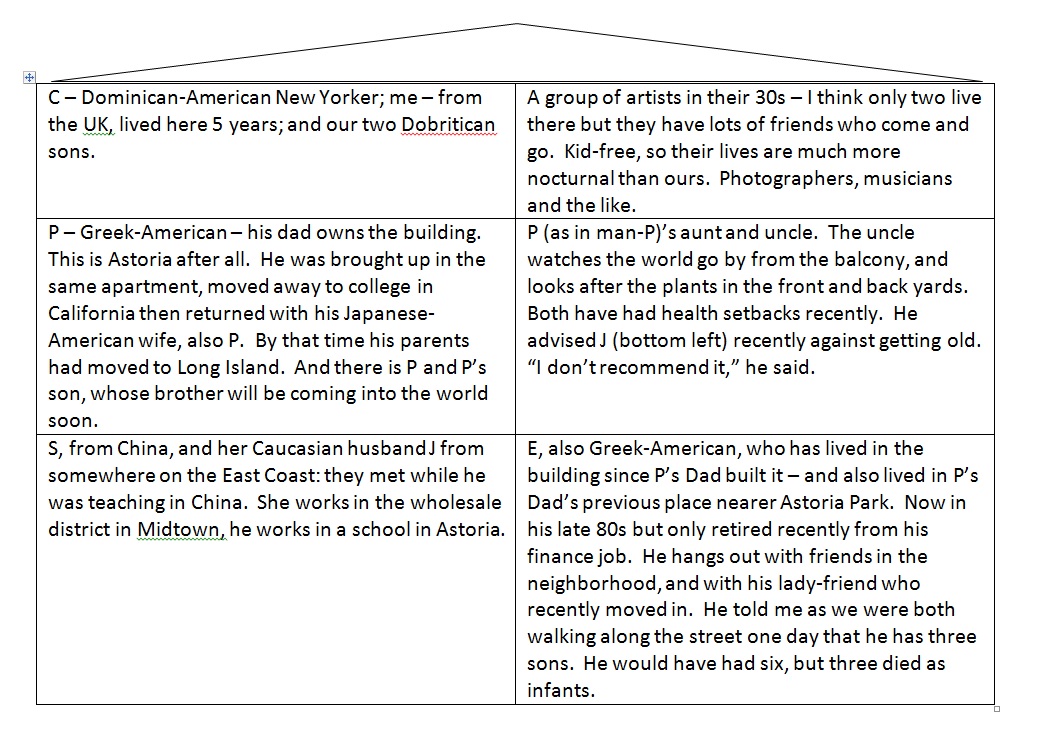 About a year ago, the two houses in front of us were knocked down. The space became a building site. JNH was thrilled because that meant trucks and diggers. The foundations seemed to take ages but now finally the apartment building is going up: the first floor is there. Buildings like it are springing up all over Astoria, and their apartments are far more expensive than the old ones in the neighborhood. They have names like “The Elizabeth”, “The ‘L’ @ 30th Drive”, “The Luxe” and “Crescent View.” I wonder what this one will be called. J’s uncle was watching the construction work recently, and I asked him if he knew whether the plane tree just in front of it was going to stay. He said yes. I thought he probably would be disappointed by the building, another concrete block going up, albeit smaller than the huge one that towers behind our back yard. Instead he said, “it’s good. We’ll get lots of new neighbors.”

Earlier this week a big bunch of pink helium balloons was perched outside a house two doors along from JNH’s Montessori. “It’s a girl,” one proclaimed. Another was in the shape of a stork. A man was coming up to the front door with his dog and his neighbor called across her congratulations. The man said thanks, then yelled at his dog to get in the house “NOW!”, his anger seeming most out sync with the occasion.