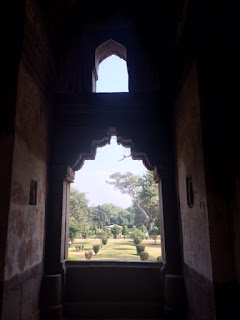 On a work trip to Delhi at the beginning of December I snuck a couple of hours in Lodhi Gardens, which I remembered so well from my first visit. That time we walked in the early morning when the birdsong was deafening and Delhi-ites were doing their powerwalks or, slower, yoga, to get into the day.

This time I was on my own and it was right in the middle of the day, though not too hot because it was Winter. Most of the time I walked, despite (in spite!) of an infuriatingly painful right knee that I hope miraculously cures itself soon. I’m getting OLD it seems – the looming 40th birthday this January doesn’t help psychologically (nor the fact it comes the day before Donald Trump's inauguration; more on that in another post). I swing between being daunted by the birthday and a bring-it-on, “embrace the new decade” mode.

Soon before I had to meet H for lunch I sat down and wrote a few notes about the latest couple of Spanish books I’ve read. As mentioned, my aim is to read just in Spanish for the rest of this year or so.

One was “Mis Documentos” / “My Documents” by the Chilean writer Alejandro Zambra. It’s a collection of brilliant stories, even though the male (usually) protagonists are not so brilliant. Most are young or middle-aged men trying to find their way without success, or at best with ambiguity.

There is plenty of meta-fiction but so cleverly done it is not intrusive. The stories play with the idea that language constructs identify and relationships, but as the protagonists try to define themselves both they and the language they use are revealed to be inadequate.

In one story, “Recuerdos de una computadora personal”, the story of a couple’s relationship is intertwined with that of a personal computer that the man installs in his apartment. They have separate logins, one for him (Max), one for her (Claudia). Max uses it to write long email missives to old friends – friends that he could see in person, but chooses not to. Claudia decides to scan all her old photo albums, and in doing so, has fun with photo-shop, removing a face here, squeezing in a celebrity there. (The stories are mostly set in the 90s and early 2000s, pre-smart-phones and ipads, post-Pinochet).

One day when Claudia has reason to be suspicious, she stays up all night drinking wine and cracks Max's login code. In one of those emails to his friends, she reads that he was considering, in a matter-of-fact way, whether or not to leave her, and storms out.

A scene later we see Max travelling the long bus journey from Santiago to Temuco to see his son from a previous relationship, Sebastián, carrying the heavy computer on his lap the whole journey because he didn’t have time to wrap it up. He hopes that his son will like to have it. But we learn that Sebastián just switches it on once, quickly figures the computer he already has is superior, and packs it away in the basement.

Back when Max first got the computer, the narrator wrote:

I then read “El cuerpo en que nací” by the Mexican writer Guadalupe Nettel. It’s a first-person closely autobiographical novel about a girl’s childhood split between Mexico City and Aix in France. In Mexico City she lives first with her parents and brother, until her father suddenly becomes absent from their lives – we/she later discover why – and her mother decides to move alone to France. The children are brought up by their over-protective grandmother in an apartment in the Olympic City, built for the 1968 Summer Olympics. She spends a few teenage years in Aix with her mother, living in a predominately immigrant neighborhood while attending a lycée with children from all over the city, then moves back to Mexico.

Guadalupe was born with a lazy eye and her parents were rigorous in trying to “correct” it. They kept it behind a patch most of the time and enforced a regime of eye exercises. The novel is the vehicle for Guadalupe’s effort (and it is a perennial effort) to make sense from sudden and partially-understood changes in her environment - her effort to squeeze out an identity between the damaging mix of abandonment and constraint that she’s subjected to. Her approach is one of quiet resistance and subtle acts of rebellion. She develops a passion for football despite her grandmother’s objections, for example, and selects friends who like her are on the fringes.

With time and language as her toolkit Nettel crafts a childhood and a period - the 1970s - that were riven with doubt and experimentation. She surrounds us with the chaotic construction of identities, never neat, always surprising.