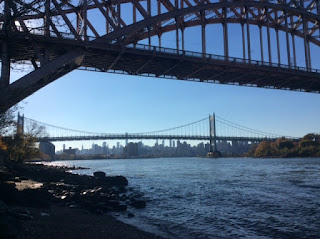 I’m seeing this as a third maternity leave, only without a baby.

Another big difference is that I’m creating the job at the other end of it, rather than having one to go back to. But…“I’m creating”… just writing those words is a reminder of what an opportunity this is, one to be treasured. The similarity with maternity leave is that it’s a window of time with a remarkably changed pace and sense of priorities. It’s been disorientating, these first few days. I’ve never since the start of my career not had the next step lined up before moving on. But I’m getting my bearings, while learning a lot about the value of not being crystal clear for a change, and keeping alert to possibilities. "This is living," as C put it.

I’m interspersing planning and building, with walking, as I tend to do. Today, the low sun through the fall trees in Astoria park, with East River flowing alongside, was so beautiful that it was hard to believe that it was the same planet as the one in which Trump's Republicans just won at least two new Senate seats, in which he fired his Attorney General the following day, and in which the news talk shows are an incessant vortex of reality, to the extent it feels like nothing is stable, or real, other than the fact that it all is very real.

There was a lot of cause for optimism too in the results, with a record number of women winning seats in Congress - among them the youngest ever woman, first two Muslim women, and first two native American women. (That said, women will still only be 23% of the total so there's work still to be done!).

The day before the election, I’d got the train down to Trenton and knocked on doors in Bordentown to get out the vote for Andy Kim, who was standing for Congress against the Republican incumbent MacArthur. Unlike today there was no sun coming through the trees – it was an overcast, rainy day. It being daytime, most people were out. Our knocks on the front doors of the wooden houses, their decks festooned with fall decorations, mostly went unanswered. But a few people were in, and we confirmed their plans for voting. It turns out that every door knock throughout that district really did count: the vote came down to a difference of just under a percentage point – with Kim winning.

D, who’s has lived all her life in Bordentown and who drove us both around as we canvassed, gave me a lift back to Trenton station. We talked all the way, in that rare way in which two strangers happen to find themselves alone together and manage to share significant chunks of their lives and perspectives in just a short space of time, before parting ways.