New York missive no 79 - Bubble baths and a piano

The bathroom, when I’m in it and in a bath, becomes a room of my own. I’ve just emerged from an hour-long bubble bath. During that time the bubbles disappeared, I read newspapers and got them splashed, my skin wrinkled and my thoughts wandered. The sound-monitor perched on the side of the sink was quiet of baby cries. Precious time.

Now there’s the noisy rhythm of a breast pump accompanying me as I write this, held in place by a sports-bra with two little holes cut into the cups. I’m topping up J’s supply for tomorrow while I’m at work. At one point during my pregnancy I mentioned that I felt like a bear. As the nursing mother of a newborn it’s easy to feel like a cow.

That’s in addition to the wonderful feelings of course. Among them is the delight of discovering things for the first time again – indirectly, but consciously this time around. It brings you back to the essence of things, clears out the crap. A tree. A toe. A laugh.

An email came into my inbox, “My mother’s piano.” In it V described the Jessie French & Sons spinet that her parents had bought after their wedding in 1945 (they met, I later learned, in Astoria). It had accompanied her into her apartments in Brooklyn Heights and Broadway. Now that she was moving out somewhere smaller it needed a new home. Did anyone want it? Yes please, I replied. Without having looked into the size and weight of a Jessie French & Sons spinet (she’d said it was small), nor thought about whether we could get it up into our third floor apartment. I could put that hasty and somewhat impractical enthusiasm down to having a baby preventing me from spending much time in careful deliberation. Or, perhaps more accurately, to my tendency for impulsive “yeses” that to date has brought so much into my life but that could get the better of me one day.

The guys from Washington Heights who moved me from 109th Street to Bank Street, and C and I into our Astoria apartment, managed to get it into their van and through our front door. But there was no way, we realized, they were going to get it up to the apartment. With three of them and C helping they could hardly lift it, let alone get it up some narrow flights of stairs punctuated with sharp turns. So there it sat. A challenge to my impulsiveness. By then I had become attached to it and determined to get it up somehow. I found Marco the piano-restorer nearby in Astoria, who gave me the number of a Chinese man he said could “do the impossible” when it came to moving pianos. Next morning, Chinese man was there on my doorstep with two others – one diminutive, like him, the other huge. When C questioned whether they’d be able to get it up the stairs he responded rather curtly that they move pianos all the time. Sure enough, with the aid of a rope, a blanket and a small set of wheels they’d maneuvered it into place in 10 minutes and were off and away. Now for tuning, and playing... 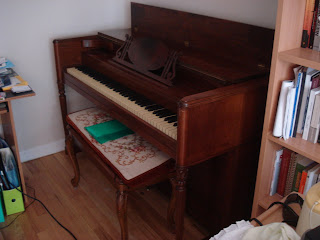 In his recent Open Democracy piece Confessions of a recovering environmentalist Paul Kingsnorth laments environmentalism’s shift away from an emotional connection with wild places that are unmarked by human influence, to a human-oriented science that lacks soul. Two traits, as he sees them, characterize the new environmentalism: an obsession with climate change (and resulting numbers-driven fixation on reducing emissions, even when this means colonizing wild places with turbines or solar panels), and the political mainstreaming of environmentalism by the left. They are important points, but as Kingsnorth himself acknowledges, he doesn’t come up with any answers about the way forward. He rightly criticizes the human-centric approach of the new environmentalism but takes it too far – saying that social and environmental justice are not connected (try telling that to someone whose land or livelihood has been destroyed by an oil spill, be it in Nigeria, Ecuador or the US Gulf), and almost, it seems, advocating for a world without people.

In a response, Andrew Dobson points out that the situation is not as dire as Kingsnorth implies. And, he says, you don’t have to go to untouched wildernesses to find a connection with nature. “Kingsnorth had his epiphany after boating up rivers in Borneo by moonlight - a ‘two-month immersion in something raw and unmediated’. If this is what has to happen for us to reconnect, then we surely are in deep trouble. Fortunately, it’s not like that. Most people have a much lower nature tolerance than Kingsnorth, so we need less exposure to nature to get the same hit as he does. This is good news: I can see something worth protecting just about everywhere, and not only where nature is at its wildest.”

Something worth protecting just about everywhere…that point is emphasized in a recent New York magazine article about how New York City has much higher biodiversity than many people imagine. In fact the diverse and dynamic characteristics of the environment here can encourage rare species to arrive and thrive - scientists are starting to see the city as "an ecological hotspot". People often ask me if I feel Astoria “lacks green spaces". You could easily say that - bricks and concrete definitely dominate. But I feel surrounded by precious pockets of green. The pear tree outside our living room window with its noisy colony of birds and squirrels, the herbs growing on our balcony, the tangled garden out the back of the house, Astoria Park, Socrates Sculpture Park, the two Coves Community Garden, the pigeons that poo over shiny cars parked beneath the El trains...(a welcome intervention as far as I'm concerned).

One day soon after C and I had met we were traveling on the 7 train. I pointed out how the New York City subway map looks like a person on a life support machine. Manhattan is the person, with lifelines and wires connecting it to the Bronx, Queens and Brooklyn that nourish it and keep it alive. C said he agreed but wished I hadn’t pointed it out because if we ever broke up, the subway map would always remind him of me and that conversation. Now each time I see the subway map I’m reminded of that conversation and the strength of our relationship. 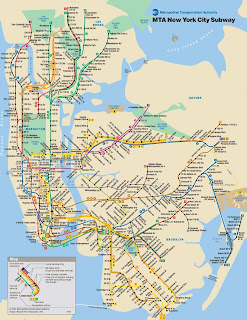 New York missive no 78 - a meditator and a musician

Some mornings I break up the subway ride into work with a walk through Central Park. I get out at Lex and 59th street, or at 5th Ave and 59th, then walk through the bottom of the park to Columbus Circle, where I get the 1 train the rest of the way. In the park one day last week I saw a man sitting on a rock in what I thought was a meditative pose. His arms hung loose down either side of his body. Then I noticed that in one hand he held a cigarette, and in the other a cup of coffee.

I also passed a man who, the previous day, had been sitting down tentatively playing on a little pipe thing. This time, he was standing upright, blasting out a tune on bagpipes. Like a peacock parading his fanned-out tail.
Posted by Annabel S at 5:55 PM No comments:

Posts on a piano, a meaty diet, and the New York City subway map to come when I have a minute.
Posted by Annabel S at 6:29 PM No comments: 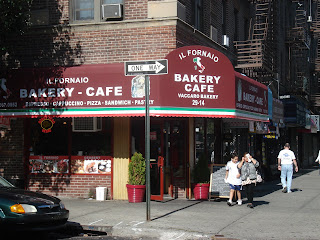 Il Fornaio (also known as Vacarro's) is a Sicilian bakery on the corner of 30th Ave and 30th Street where the produce is tasty as long as you have the patience to wait for it. The other day a woman called Samantha, Sam for short, was waiting with a girl friend for their sandwiches to be made. Sam was large and beautiful, with dark wavy hair, a subtle nose stud and her curves accentuated by a tight top and trousers. She oozed sex appeal that she managed with poise. The Italian-American guy in his mid-thirties working at the till was enthralled. “So how old are you Sam?”

“What’s the other half?”

“That explains it, where you get those good looks from.”

Another customer reminded till-man that he was still waiting to pay. Till man dealt with the transaction then turned his attention right back to Sam.

“You ladies eating in or taking out?”

There are three stools in Il Fornaio. A man sitting on the middle one got up so the two girls could sit next to each other. “You gave them napkins?” till man asked the man who made the sandwiches. Delighted that the answer was no, till man came out from behind the counter and approached the two girls, bunch of napkins in hand.
At which point my salami sandwich was ready and I had to leave Sam, Sam's friend and till man to it.

This seemed such an Astoria scene to me, for the friendly interaction (in a small shop) between strangers (doesn’t have to be flirtatious) and the fact ethnic background was factored into the equation.
Posted by Annabel S at 12:35 PM No comments: