In the early morning light the long shadows of skaters on the Wollman rink in Central Park slice like windmill sails. An analogy of life is being skated out. There are the skaters who dance well and effortlessly, weaving with ease among the rest. Others stride out but stumble clumsily, others cling to the edge and still others clutch a partner for support. All of them carve a trail that will disappear soon after they leave the rink.

Moment of realization at 34th Street subway station recently. The reason why New Yorkers move so fast isn’t always because they are in a hurry to get somewhere, but that they want to create some space between themselves and the next person. A perpetual and futile instinct to escape the crowds.

In London a couple of weeks ago I walked from Waterloo station up to our office on Charlotte Street, on the morning of our trustee meeting. I had a tingling tiredness because JNH, discombobulated with jetlag, had been awake till 5am so I’d had just a couple of hours sleep. It was strange seeing such an utterly familiar walk through outsider's eyes.

By the steps leading down from the station to Shell Centre, a man dressed in orange with a collection bucket stood next to a sign saying “Orange for Orangutan Day”.

I passed through the art installation that hardly feels like one – wall of feintly-outlined white neon bricks – in the approach to Momi and the Archduke pub.

I admired Mandela’s head at the top of the steps by the Festival Hall.

I entered the Pain Quotidien – like the other brand memes I mentioned in missive no. 83 Pain Quotidiens are everywhere now – to buy a “walnut and raisin flute” of bread to munch on my way over the bridge. It cost £1.50. I paid with a £2 coin and felt its heft compared to US currency.

I saw a splash of gerberas by the flower stall next to Embankment station.
I passed Fitness First gym. Through the gaps where the laminated commercials advertising the kind of body you could have had peeled off the windows I saw the exerting real bodies behind, not far off those promised bodies actually.
I smelt Burger King as I went through Charing Cross station.

I smiled at the statue of Oscar-Wilde with his wild hair lying down and the inscription at his feet, “We are all in the gutter but some of us are looking at the stars.”

I passed the Crypt, then the Chandos, thinking I’m looking forward to drinking again, having a pint.

I looked up at the theatre where Art was on for so long and now there’s a show with Bill Bailey.

I skimmed the edge of Gerrard Street in Chinatown where P was scared of the dragon at my 10th birthday.

I passed the Curzon on Shafesbury Avenue, then up Frith street which felt fresh it always does in the early mornings, breathing easy after another night of crowded activity: Balans, Café Italia, Ronnie Scotts, Barra Fino, Arbutus, spreading at the end into Soho Square.

I dodged through the heaving traffic of Oxford Street (quick as possible) to Rathbone Place that leads straight up to the red-brick office, where the gingko tree outside faithfully marked the season with its bright yellow leaves.
Posted by Annabel S at 6:49 PM No comments:

The fact that we move the clocks an hour twice a year is reassuring. It shows that time doesn’t control us completely.

There are brand-memes that suddenly go into multiplying overdrive it seems, achieving ubiquity. At the moment in New York those are Snapple, Boars Head, Stieg Larsson. The shop and subway-vendor fridges are stuffed with Snapple drinks, Boar’s Head meat and cheese is on display in all the delis and at least one passenger in each subway carriage is clutching a Stieg Larsson book…The Girl with the Dragon Tattoo… The Girl Who Kicked the Hornets’ Nest…

JNH harmed something for the first time the other day. It didn’t matter much, but I felt it. He has a mobile of felt dragonflies hanging above his crib. From the kitchen I heard a rustling and crunching sound, and went in to his room to see he’d stretched up and grabbed hold of one of the dragonflies. The whole mobile was a tangle. The round frame was at a jaunty angle, the threads were all twisted and the dragonflies all over the place. The green one had lost two wings.

C, JNH and I went on a 5 hour bus journey last weekend to join a latte-sipping rabble rallying to restore sanity in the Mall in Washington DC. It was worth it for the evening walk to the White House, the Washington and Lincoln Memorials etc. in fading October sunlight after we arrived, and for the fun and relieved atmosphere among the 200,000ish (Stephen Colbert put it at 6 billion) gathered the next day, with signs saying things like Floridans Against Rational Thought, This is a Sign, Grumpy Old People, Death to Extremists, I’m with Stupid. Though the feeling I’d had before we went – that, while funny, the fact that so many people including us saw a rally organized by two comedians as the only rally worth traveling for this year, reflects a seriously sorry state of affairs. 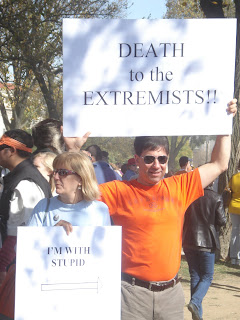 H having moved back to London, and the Quincy hotel where I’d stayed before being booked up, we found ourselves somehow staying at the ridiculously big and wannabe-posh Omni Shoreham hotel , one subway stop up from Dupont Circle. It’s the kind of place where guests feel like profit-fodder, buying a $3 coffee here, paying a debit card fee there and feeling disproportionately subversive when tipping an underpaid porter.

Opposite me on the N train on the way back from Brooklyn on Friday, an elderly man from Malta who was here for today’s Marathon got talking to the local man sitting next to him. The former was on his way to a Maltese social club in Astoria – he had the address written down on a little card – the latter was on his way back to his home near Steinway street, where, he described, Egyptian and Serbian communities rub shoulders. “There’s a bit of everything round there,” he said, “I didn’t know about the Maltese social club though.” Maltese guy asked about the Marathon route and whether the boroughs were island or mainland. His neighbor explained slowly, patiently a few times, and Maltese guy repeated after him. “So…Staten Island – island; Brooklyn And Queens, part of Long Island, island; Manhattan – island; and the Bronx, mainland! I get it, thank you.” He looked delighted. I kept an eye out for him today as JNH and I watched some of the 45,000 runners approach the daunting climb of the Queensborough Bridge, but didn’t see him. From his wiry but strong-looking form I imagine he’d already sped right ahead.
Posted by Annabel S at 5:44 PM No comments: