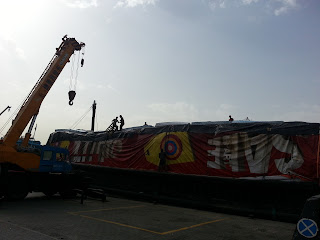 A dhow being loaded with goods in Dubai Creek, bound for Somalia. One of its crew told us it's a good thing the boat looks old and run down - that means it is not tempting to pirates.

Recently my colleague from Beirut and I went on a work visit to United Arab Emirates. We were mainly in Dubai but also spent a day in Abu Dhabi and a morning in Sharjah. On the last evening in Dubai we went for a meal with members of my colleague’s family – some of whom live there – at a restaurant on the Emirates’ “Palm Jumeirah”, a palm-shaped island tagged onto the coast by its trunk (which is also an eight-lane motorway). The island didn’t exist until the early 2000s when it was built by dredging and dumping tons of sand in the form of a palm tree, to extend the city’s beachfront area by 40 miles for the development of luxury apartments and hotels.

As we left the mainland part of the city we became snarled in a traffic jam. They are not uncommon in Dubai because, other than the two-line metro, the only way to get around is by car. No-one walks. Sidewalks are rare, so in many parts of the city it is impossible to. In this case the snarl was caused by a deep construction ditch down the middle of the road. Similar, perhaps to the ditch in which two Indian workers, Ram Kumar and Selvaraj, were buried alive in the nearby city of Al Ain soon after our visit, when the sand on each side of the trench collapsed as they tried to fix a pipe.

Once on Palm Jumeirah the traffic subsided. But it still took around half an hour to reach the restaurant as the car slid through curved bright-lit underpasses along streets lined with pristine buildings around bends back through the same underpasses and over bridges seemingly trapped in a road-loop designed to prevent us from getting to our destination. Reach it we did, eventually. We ate a barbeque meal with a view across to the winking city. The open-air restaurant was flanked on two sides by apartments and on the other by a sleek swimming pool. On an apartment balcony a small girl twirled pirouettes to the restaurant music while her parents, or whoever was taking care of her, set the table beside her.

The structure of a city like Dubai where you are forced to drive creates separation. It's a divide that is echoed everywhere - in the fact that public life takes place largely in air-conditioned malls constructed on desert, for example. The separation is necessary in that it makes the circumstances of the city tolerable through denial: a capitalist dystopia dressed up as utopia where you can get your apartment re-decorated for $50, where you can earn double (or more than, anyway) you would earn on the rice fields at home by working at the teetering steel pinnacle of a tower block in the 100 degree sun.

As Daniel Brook puts it in “A History of Future Cities" though, it is not helpful to view Dubai as all awe or all horror as tends to be the case:

“Apologists for Dubai, like architect Rem Koolhaas, who salivates over the city-state as ‘the ultimate tabula rasa on which new identities can be inscribed,’ cannot explain away the barbarism of its system: one that assembles all the world’s people but makes no attempt to treat them all like people. Those who condemn Dubai, like urban theorist mike Davis who tars it as an ‘evil paradise’ cannot explain the allure of the city for the hundreds of thousands of low-wage guest workers who have migrated there.”

The unobserved shades of grey are there within individual inhabitants but somehow get lost when you look at the whole. They are there within people like Adil, a taxi driver who we came across outside the Jumeirah Lake Towers. JLT is one of the city’s many free trade zones, this one a conglomeration of over 70 skyscrapers with 6000 businesses, centered around commodities trading. Here the traffic was snarled too, as it is every day. The towers were mostly finished a few years ago but the roads between them were not.

Adil’s experience in UAE is bittersweet. He spent his first few years paying off the fees for getting his job in Dubai, with the state-run taxi firm Dubai Taxi. He works long hours, sometimes to the extent he knows he is driving dangerously from tiredness. He still has to pay a large chunk of what he earns each day back to the company, which still holds his passport, and which only allows him to go back to Bangladesh once a year. He finds that especially difficult because he has a young daughter there. He said he was living for the next time he can go back. And yet, Adil said his situation is far better than that of Jumeirah taxi drivers (the Emirate where he lives), and of his friends who worked on construction sites. He wants to stay some years, perhaps earn enough to buy his own car to run a taxi service on his own terms.

The situation in UAE is kept on a relatively even keel by the synthesis of economic dreams and absolute social control by the government. At times, frustration when the former are not realized threatens the latter. In May thousands of workers at the Emirati construction firm Arabtec went on strike, demanding better wages. Reuters just reported that the strike happened and, a few days later, that Arabetc said it had resolved the dispute, without saying if the workers’ demands had been met. Many of those involved in the strike were deported.

Not surprisingly, voices from the workers themselves were missing. But a reporter for Al Jazeera (which is headquartered in neighboring Qatar), stood by the Arabetc workers’ camp gates – they weren’t allowed inside – to gathere a few testimonies. One, for example said, “I have not gotten a raise in the last nine years. The strike ended because of pressure from higher management and police. People are scared. It is possible this will happen again because conditions are so bad.”

This week I was immensely privileged to listen to a conversation between Henry Belafonte and Dolores Huerta, looking back at the civil rights movement in the US to inform its future. Playwright Bryonn Bain chaired the discussion. He kicked it off by quoting Martí’s “radical no es más que eso: el que va a las raíces,” - “to be radical is simply to go to the roots." The roots are in all of us. We need to put our ear to the ground more often and listen to what is going on down there.