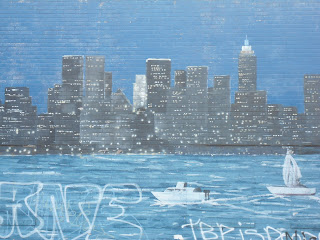 Part of a graffitied mural on 48th Street with Northern Boulevard

On Northern Boulevard in Queens, at its intersection with 34th Avenue and 49th Street, is a shopping center featuring a warehouse-style Old Navy (and not a great deal else). I went there yesterday morning, with CMH in his stroller. I had found myself once again post-pregnancy with practically zero summer clothes that I could wear and almost zero time to buy new ones.

Some of the online reviews of the store are not kind. One on Yelp says: “Imagine if Godzilla took a liking to eating clothing instead of humans. Then, imagine if the clothing Godzilla drank too much the night before and couldn't find a toilet/trash can, but found this Old Navy to puke in.” Others include snooty comments like, “This is a ‘must skip’” and “Pretty ghetto.”

But for this trip it was just what I needed. I walked fast through the hot Astoria streets to get there. The white muslin sheet I had draped over CMH’s stroller to keep the sun off flapped with the movement, so that from a distance it probably looked like some kind of desert apparition. We just made it over the Boulevard during the time the pedestrian crossing sign said walk: big boulevards anywhere, but especially those in Queens, are hostile to people who are not in cars.

Once inside the store CMH was making waking-up signs. I rushed around the haphazard clothing rails and piled potential purchases on top of his stroller. So far the good thing about the store was that it was far emptier than any you’d find in Manhattan so I could whizz round easily. And once in the changing rooms, the fact that each cubicle was large (so that when CMH did wake up crying I could comfortably sit down and nurse him), that the woman working there was relaxed and understanding, and that there weren’t queues of people lined up wanting to try things on all worked in my favor. I emerged better equipped, with three new pairs of pants and five tops. That kind of buying-in bulk normally nauseates me. But sometimes it’s just the easiest way to go - there are always buts to explain unethical purchasing practices, often related to convenience and even more often to price.

As I had been going around picking items to try on, a woman who was also shopping said, “my son’s a teenager now, but I remember doing that.” I wasn’t sure if she was just referring to shopping with a baby in tow, or the way I put the clothes on top of the stroller. She went on to ask if I had other kids and I told her I have a two-year-old too.

“My sisters and brothers, they had two or three kids, all of them. I had cancer when I had my son, so never had more."

Stalling a little from being plunged into her story (something I should be entirely used to by now), I replied along the lines of, “I’m glad you were able to have one.”