On Wednesday evenings, JNH’s soccer practice is in Flushing Meadows Corona Park. While he plays, I walk up to the Unisphere. The first time, trees nearby were covered with pink and white blossom which floated down in the wind as people beneath the trees took photos, played, embraced, or sat depending on their age and as so often these days I was struck by the immeasurable value of public spaces with nature – breathing space for bodies and minds, collectively and individually (don’t get me started on the fact that there are growing efforts to put a price tag on nature, co-opting what’s left of the planet as a profit machine ostensibly to save it).

This Wednesday, the blossom was no longer there, but a new spectacle had arrived. Misty fountains of water came up from the ground all along the walkway leading up to the Unisphere, capturing sunlight. The photo illustrates it better than words can. The name “Unisphere” feels more resonant than ever.

The kids’ soccer practices and matches have taken us all over the city this season. There's been a long subway ride on the N train out to Coney Island, where CMH was thrilled by the sight of the recently re-opened Cyclone and resolved to come back to ride it with C (JNH and I decided we'll do the Aquarium instead). Getting on to the homewards train (after a loss – there have been many) I looked back to glimpse the rollercoaster’s red lettering “CYCLONE” against the night sky.

There have been taxi rides over the Triborough Bridge to Randall’s Island, invariably looping around and around a few times in search of the right field. The island has over sixty of them, but clustered within small groups for the 10s, 20s, 30s and so on, their assigned numbers go up to 91 which seems even more overwhelming. There have been pier pitches – fancy Pier 5 in Brooklyn Heights looking across to the Financial District, with signs around its edge saying that you’re welcome to fish, but that pregnant women, women of childbearing age and children under 15 shouldn’t eat fish or eels from the East River's waters, and Pier 40 by the Hudson, the athletic field looking less snazzy than it would have done back when it opened in the late '90s.

Back here in Queens, we frequently take the Q18 winding bus to Frank Principe Park in Maspeth. The square of playgrounds and sports fields is edged by Queens-defining elements: a cemetery (Mount Zion)…a gas station (Exxon, handily with a Dunkin’ Donuts outlet inside)…an auto repair shop…a roaring highway (the Queens Midtown Expressway section of the I-495)…suburban-style houses…and a hazy Manhattan skyline in the distance.

The soccer has taken us to other places too, from Astoria Park to Manhattan Beach, from Long Island City to Sheepshead Bay. Throughout New York there’s an atmosphere of reunification – people reuniting with their city and with each other in typical New York proximity - of relief and fragility, barely-buried trauma, and a heightened appreciation for small things. 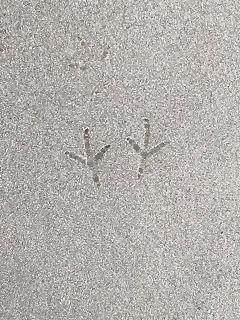 Yesterday would have been Mum’s 74th birthday. She died soon after her 70th, four years ago. As I often do on her birthday, I walked down to Socrates Sculpture Park, where we scattered half of her ashes in the East River (the other half we scattered by a big tree in London, which P and I used to climb as kids).

Down on the sand at Hallet’s Cove there were seagull footprints. We all leave our marks. To be considered, appreciated, each one absolutely unique, eventually erased – actually I should say absorbed – by tidal flows, or generations.

There was sculpture in the park, called Eternal Flame. As P said when I sent her a photograph, it’s not beautiful to look at. (In fact it could almost look like a crematorium chimney). But the idea is beautiful; it’s a concrete chimney with four barbecue grills at the bottom, which visitors are welcome to use, and which prompts thinking about the communal act of cooking and the fact that at any moment in time, somewhere in the World someone is tending to a cooking fire.

I sat down on one of the brightly-painted picnic benches by the sculpture, and sent my photo and message to P. I told her that I had walked down to the Sculpture Park with the little blue backpack that Mum used to use, which she always said was so practical and useful. And that, writing "backpack", got me crying. Funny how it can take a very specific object like that to cut through the nonsense and get to the center of how you’re feeling. A kind of emotional acupuncture by objects and memories.
On Mum's birthday, invariably a bright Spring day, I always feel a mixture of deep sadness, with being inspired and recharged by her memory.
Posted by Annabel S at 6:40 AM No comments: