NY missive no 160 - Reading as navigation 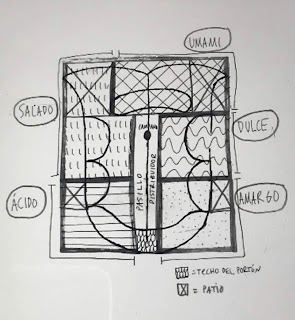 The layout of the gardens in "Umami"

Last Wednesday evening as our kids ran around enjoying the crazy games for a birthday party at Chucky Cheese on Northern Boulevard, one of my fellow moms asked me what I’ve been reading recently.

What I’m reading right now came quickly to mind: Carlos’ Fuentes short story collection “La Frontera de Cristal”, set along the Mexico-US border. I chose it as I was hungry for some nuance and lived-humanity narrative about the border territory, while the mediasphere was so saturated with Trump’s wall obsession and the resulting government shutdown.

But before that? Agghhh! My mind went blank, other than realizing that a lot of what I’ve been reading has been work-related: PDF reports sent to my i-pad for rapid digestion. The combination of the partying kids and the fact I’ve been juggling reading various things at once meant I was at a loss on how to elaborate.

Here, therefore, I'm pausing to capture some details of recent books before they get further buried in my mind-compost.

One of the work-related ones was Tom Angotti’s New York For Sale. It describes the way that the international and local real estate dominance in New York actually creates momentum – or more like forces a space - for a juxtaposing creative response in the form of community-led urban planning. I’m now onto his latest book, edited with Sylvia Morse, Zoned Out, which underscores the racist structures behind top-down land re-zonings and has provided inspiration and insights at community meetings throughout the city.

Novel-wise, I recently read Sergio de la Pava’s “Lost Empress”. With similar mastery to his first book Naked Singularity it combines humor and violence and weaves multiple narratives and voices. This time the narratives are linked by two threads that draw on the core of American experience: football, and the criminal justice system.

At Astoria Bookshop I picked up the short stories selected by Roxane Gay for the 2018 Best American Short Stories collection. They include Danielle Evans’ Boys Go To Jupiter, in which a white college student's boyfriend gives her a confederate flag bikini, snaps a picture of her in it and posts it to Facebook. She rides the resulting campus outrage with a disturbing level of insouciance and detachment. Like the best short stories it delivers complexity despite its compactness. And part-way through there's an unforgettable gut-punch of a moment.

A highlight last year was Laia Jufresa’s Umami. It connects the interior and exterior lives of people living in a small group of houses in Mexico City, set around their gardens which are laid out like the flavors on the tongue: i.e. bitter, salty, sweet, sour and the fifth taste, “Umami”. The novel hinges on two deaths, the tragic drowning of one of the family’s daughters, Luz, when she was “almost six”, and the death of the elderly academic Alfonso’s wife Noelia from pancreatic cancer. The characters' multi-layered processes of mourning and moving on create the ebb and flow of the book, which is written in five sections that move backwards in time. The novel resonated as I still, a year-and-a-half later, am journeying through the process of mourning for Mum. (Process is much too ordered a word).

At the end of a video interview with Sophie Hugues who translated the novel into English, Jufresa says:

“It was very important for me to write a book about grief… I was living in Mexico where grief was very present because a lot of people are being killed and we have 25,000 who have disappeared. A lot has been written about the violence of it, and when you have so many people dying, you basically have no time for grief. Then people become numbers, and disappeared people become this long list of names, and a lot of writers are stopping with the violence. But I felt like no-one…well not no-one…but I really felt the need to say, stop. Grief needs space.

And I wanted to write a book that had nothing to do with the violence but that allowed the time and space just to remember that every time one person dies, a lot of lives are affected. So that’s why I wanted to make this reflection game [in the style of the novel]…Even if it's not your sister, but someone who you used to see every day, you are affected by it.”

In a World where so much is in flux, and where the center, whatever that was, really does not hold, books and stories center us.

They hold our attention, even if only for a short time. And, over time, our reading patterns create stepping stones, guiding us through this mysterious life and creating a story of their own.