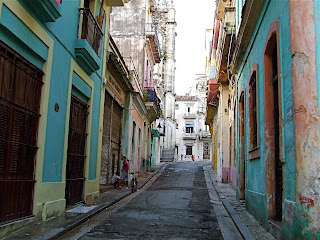 This paragraph made my day, when I read it on the subway on the way to work recently. It’s from Leonardo Padura’s Vientos de Cuaresma:

In the single-sentence paragraph Padura connects the Havana streets that Conde – the misfit police detective who appears in many of his novels - is walking, to Conde himself, to other parts of the country, and to his ancestors and their memories, blending place and person. I’ve always loved the connection between walking, writing and self. Here’s an amateur translation that gives some sense of the meaning, while not doing nearly enough justice to the original Spanish:

“Anyhow, that solitary stroll through the neighborhood was a joy that el Conde allowed himself every now and then: in that precise place his grandparents, his father, his uncles, and he himself had been born, and to roam along Calzada, the street that now covered the ancient path where once the best fruit from the orchards of the South traveled, was a pilgrimage into his past, reaching the boundaries of memories he had inherited from his forebears.”

I said that Conde is a misfit police detective because at heart he wants to be a writer. Perhaps he recognizes that most mysteries are less “solvable” than detective work would presume. His character provides an effective conduit to explore the Cuban/human experience in all its appreciation and frustration in a particular place and time. In Vientos, Conde is 35, single, jaded. He falls too easily in love, is almost broken by the heady murder case he's assigned to with connections to his old school, the death of a colleague and the relentless dusty Lent winds (the Vientos de Cuaresma) breathing through the city, and is held together, just about, by his group of childhood friends.

I read Vientos having decided to spend most of my (limited) reading time over the next year or so reading in Spanish. Let’s see how it goes. Prior to that book was La Mudanza de los Sentidos by the Dominican writer Angela Nuñez Hernandez. This was an immersion into the world of the just-teenage La Leona as she and her brothers and sisters are brought up by her mother in a rural part of Dominican Republic under Trujillo. I finished reading it while we were in DR – in fact shortly after we drove past the exit to Hernandez' hometown Jarabacoa, on our way from Santo Domingo to Sosúa. I struggled with the Spanish, which is deeply poetic and draws on oral Dominican traditions. That struggle was immensely satisfying though. The displacement, and the concentration needed to glean sense and understanding from disparate signs echoed to an extent the state of mind of the adolescent protagonist.