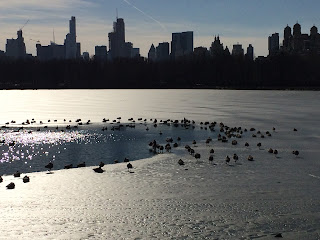 For my birthday C gave me “Never Built New York”, on grand architectural projects that for one reason or another never saw the light of day. It has an introduction by Daniel Libeskind, the architect who designed the winning plans for the World Trade Center site – some, but not all of which came into being as he had envisioned, given that money-politics inevitably intervened (it’s a long story).

By coincidence, the day after reading that intro, I spotted Libeskind’s autobiography “Breaking Ground” among the books stacked up in boxes outside the second hand store on Astoria’s Broadway between 40th and 41st streets. I was on my way to spend some treasured birthday weekend hours alone at Museum of the City of New York and Central Park, so bought it for a couple of dollars and started reading on the subway. He intersperses stories of his life, as the son of Polish survivors of the Gulags, who found success late in his life as an architect, with those of the buildings he designed.

They include the Jewish Museum in Berlin (a hell of a process getting that one done), and the Imperial War Museum North in Manchester. The budget of the latter was cut drastically part way through. The team had to make changes to the materials and way the museum was built, but it was still a great success. "The moral of this story," Libeskind writes, "is that reduced budgets can sometimes be the impetus to greater creativity."

It’s one of those books that’s arrived in my life at a serendipitous time, delivering an outsized dose of meaning because of the time when I’m reading it. I’ve been thinking a lot recently about buildings, who builds them, and how those decisions and people define the lives of the rest of us. “A great building – like great literature – or poetry or music – can tell the story of the human soul,” Libeskind writes.

I carried on reading for a while after the museum (exhibit of photos of MLK in NYC), on some of those ancient schist rocks that crop up throughout Central Park. I mean really ancient – Manhattan’s bedrock ranges from 1.1 billion to 190 million years old - and they seem it, emitting age and stability while the people who walk across them come and go, and come and go. It’s a reminder of how fleetingly we are here, yet how each of us also is just a continuation of those who have come before us. Mum and I had walked across those same rocks when she visited for a fall weekend when I had just become pregnant with JNH.

Libeskind writes about the material that architects use. “Painters have their colors, musicians their sounds, writers their words – thousands of them. Although we can design buildings in our heads or on paper, the tools of architects are less easy to assemble.

“These are my tools: stone, steel, concrete, wood, glass. And the challenge before me is to design expressive buildings – buildings that tell human stories – with these mute substances. Like a dancer, I am acutely conscious of gravity, and I find it remarkable that these materials come from the earth. What is concrete? It’s the earth. Architecture, I realize, is about assembling various components from the earth into visibility.”

I walked back down through the park to 59th Street, around the Jackie Onassis reservoir which glistened with sun bouncing off the ice that had just started to melt in patches. The reservoir was dotted with thousands of sea-birds who rose and fell, creating patterns. I first discovered the reservoir soon after moving to NYC, walking up through the park as dusk was falling and feeling like I was racing nightfall.