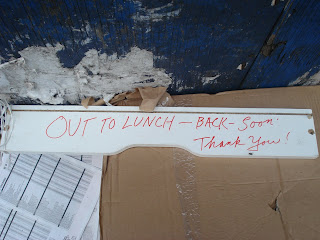 The man on the corner of Sixth Avenue and 28th Street comes and goes. When he’s gone he invariably leaves a trace, like this one.

My fascination with all things maps continues. I learned recently that Taiwan is sometimes referred to as a sweet potato because that’s what its shape looks like when viewed on a N-S map. And that when viewed W-E it looks like a whale.

Recently I finally read Frederick Douglass’ Narrative of the Life of Frederick Douglass, an American Slave. One of the many things that struck me about it was his descriptions of the differences between how slaves were treated in the city and the countryside. Such as this one:

“I had resided but a short time in Baltimore before I observed a marked difference, in the treatment of slaves, from that which I had witnessed in the country. A city slave is almost a freeman, compared with a slave on the plantation. He is much better fed and clothed, and enjoys privileges altogether unknown to the slave on the plantation. There is a vestige of decency, a sense of shame, that does much to curb and check those outbreaks of atrocious cruelty so commonly enacted upon the plantation. He is a desperate slaveholder, who will shock the humanity of his nonslaveholding neighbors with the cries of his lacerated slave…”

It made me think about cruelty in urban and rural areas today. Can the same be said, that in an urban area people are more aware of what their neighbors are doing so they behave better? The density of housing is such that in many cases I’m sure that’s not the case anymore: abuses can be buried in the crowd, and even when they’re noticed often people won’t want to intervene, hardened as they are by it, or used as they are to not interfering with others’ business.

I think that ports and peripheries are where the heart of a city can be found. In Manhattan, not that it’s a city in and of itself, there is little port and periphery left. But there are remnants of them on the far West side of Midtown. A few Saturdays ago J and I arrived over there early for his swimming class. He was asleep so I passed the time walking in a loop down to the river and back, along streets in the 50s.

On the walk we passed symbols of how the city functions. Of how the basic dynamic is one of wealthy people living it up and poor people working to keep them doing so. We passed gleaming car garages. I had no idea there were so many out that way. The cars posed in their glass-walled showrooms like frozen zoo animals. We saw two massive docked cruise liners spewing out their passengers who emerged onto the city streets with an air of conquest, and spewing out their workers who crossed over the West Side Highway straight to a call center to speak with home. We got a glimpse into the stable where the horses who pull carriages for tourists in Central Park are kept. It was gloomy in there. And we saw a man cleaning out the stable, tipping horse poo into a steaming bin.

I’m glad that the Occupy Wall Street protests and related movements around the world are focused on national governments. That’s as opposed to past protests with more international targets, like the 1999 “Battle in Seattle” against the World Bank. Because ultimately it is the governments that individuals, in democracies, have voted into power, and so we should, if things were functioning ok, have some influence over how that power is used. The fact that we don’t is the heart of the matter.

I recently re-read the final chapter of Joel Bakan’s The Corporation and again was convinced by his argument: that given corporations in their current form are only legally accountable to their shareholders they cannot be expected to act in anyone’s interests but their own unless compelled to by the governments that created them (“incorporated”) them in the first place. “Many among the corporate elite and their defenders would likely sing ‘Hallelujah' the day activists against corporate abuse abandoned government,” he says. 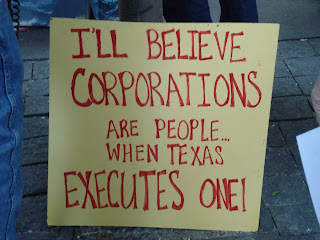