Change as opening up new doors

After 13 wonderful years I'm moving to work at a new organization in mid-April, shifting from international human rights to community organizing in New York City. Of course there are mixed emotions but I'm excited about the opportunity to help build alliances between labor, social justice and environmental groups in this city that I've loved since it became home in 2007 - all the more so in the current political climate.

Through the process of letting people know about my move and reading their responses, I've been reminded of Jhumpa Lahiri's beautiful New Yorker essay on shifting from writing in English, to writing in Italian. It's not about a change of career per se, but a change in context, and the way in which this has implications beyond the change itself:

"One could say that the mechanism of metamorphosis is the only element of life that never changes. The journey of every individual, every country, every historical epoch - of the entire universe and all it contains - is nothing but a series of changes, at times subtle, at times deep, without which we would stand still. The moments of transition, in which something changes, constitute the backbone of all of us. Whether they are a salvation or a loss, they are moments that we tend to remember. They give a structure to our existence. Almost all the rest is oblivion."

I like the emphasis on change, rather than progress. As Trump's administration is reminding us pretty much every day, social "progress" is ephemeral, and in response the fight for justice has to be continuous.

While I cook in the kitchen, CMH likes to make "soups" in a saucepan on the floor. The base is water, then he adds all kinds of things. Last weekend, he was making a soup for Barack Obama who was apparently coming to visit at 6am the next morning. Today, JNH got involved too and they got creative with a "venomous soup". The ingredients included lumps of green watercolor paint that quickly dyed the whole thing, salt, peppercorns, butter, flour, turmeric (the yellow wasn't strong enough to influence the bright green), blades of grass, peanuts, pieces of a blue sponge, and a floating cork.

We thought it could inspire a story called the "Venomous Sea". 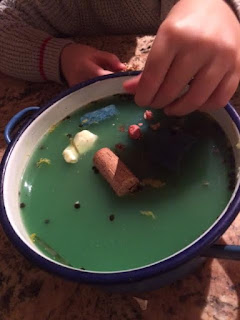 Only important things get placed on JNH's windowsill.

At the moment, there's his cup of water (a permanent fixture), along with a Chinese china tiger (he was born in the year of the tiger), a wooden cat, a spider robot that M and D bought him at the London Science Museum last year and that he re-discovered today, and a couple of superhero masks. The items on the windowsill apparently help to protect him while he sleeps.

Only so dark for children

JNH loved the first book in Lemony Snicket's "Series of Unfortunate Events." It tells the story of three children who are orphaned when their parents supposedly die in a fire, and their lives proceed from bad to worse as they move from one crazy guardian to another. In the same way as with the Roald Dahl books, the fact the story was interspersed with humour, vivid characters and imaginative adventures kept him engrossed and unfazed by its underlying darkness and devastating happenings.

Then he spotted commercials for the series on Netflix. But after three episodes it was clear the bleakness was too much and poor kid said he didn't want to see any more because it was giving him nightmares. C and I went from loving his engagement with the story to feeling like bad parents for freaking him out. It reminded me of when I saw Nightmare at Nine Elm Street when I was 10 at a friend's house. I spent the rest of the Summer thinking that Freddie Kruger with his long metal fingers was coming up behind me to grab me. Minor trauma in the bigger scheme of things.

JNH likes to make up stories on our 15-minute walks to school. This morning the sidewalks were lined with snow following a heavy snow-storm yesterday. JNH broke "ice rocks" (aka lumps of frozen snow) along the way, by dropping them on the ground. He decided that on the day that all the ice rocks in the world are broken, all the world's myths would come true. The Loch Ness monster the yeti and so on, would be real.
Posted by Annabel S at 5:19 AM No comments:

NY missive no 144 - He Will Not Divide Us, Astoria 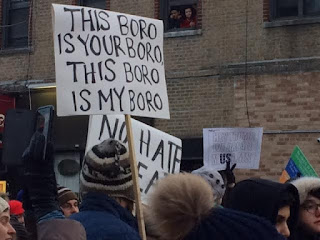 Recently an elderly white man was pushing his shopping cart long 30th Ave. As I walked past he greeted a neighbor with a wave. We were right next to Trade Fair, the supermarket where back in 2011 I interviewed the two managers Mustafa and Sabah. Mustafa had said “You cross borders when you cross our aisles,” referring to the fact that they stock products from all parts of the world so that “no matter where you’re from you can always find what you want.”

This scene would have just been a very typical Astoria sidewalk snapshot reflecting the “old” and “new” of the neighborhood, other than the fact that pinned to the front of the man’s shopping cart was a large “Trump” sign.

The sign bounced another narrative to the foreground, in which the elderly man was publicly supporting a Presidential candidate – by then President elect – with a divisive anti-immigrant, anti-minority agenda. Whatever the man’s personal motivations for voting for Trump, the sign on his shopping cart conveyed a message to the Latin American, Middle Eastern and Asian neighbors walking along the street next to him that “I support a ‘great’ America that you are not a part of.”

As Trump’s numbers rose during the primaries I remember feeling that Astoria’s diverse sidewalks, which I’d come to take for granted, were a fragile, increasingly threatened fabric. Now that sense is intensified of course, two weeks into his Presidency.

During a Muslim solidarity gathering on Steinway Street and 25th Avenue this Friday, local politicians celebrated the diversity of the crowd while a small group of three or four riled-up white men and women stood on the stoop of an apartment building behind the rally chanting “Go home, Go home!” and “Don-ald Trump, Don-ald Trump!”.

During the installation of the “He Shall Not Divide Us” livestreamed installation at Museum of the Moving Image, artist Shia LaBeouf was arrested when he retaliated against a man who had interrupted with racist language – and since then the livestream has been used other times by neo-nazis.

Yet immediately after the inauguration there was an accelerated strengthening of ties in response to Trump's divisive and dangerous agenda. There's a recognition of the urgency and power of collective action and organization.

Challenging Trump’s policies will be a question of numbers, i.e. physically demonstrating that, just as Trump lost the popular vote, the policies he is now implementing are in the interests of a slim, powerful majority of Americans. And a question of strategy, i.e. from protest, to fearless legal efforts, to strategies to bring key Republicans around against his agenda. And in response to Trump's supporters, it will involve clear communication policy-by-policy to make it clear that in many cases his approach is not in their interest, as well as outright rejection of racism in all its forms.

In the midst of the turmoil of big picture politics, small, local interactions keep me grounded.

One Saturday afternoon we took our two "dining" chairs ("dining" sounds much too posh for what they are) that have very dirty beige seat covers to be re-covered. We went to a little place called "LIS Upholstery" along the quiet end of 28th Ave in Astoria, beyond Steinway. CMH said "boring place" when he walked in and saw the curtains and cushions on display. But then...the kids saw the big room at the back of the store where two guys were busy using old-school sewing machines fixing curtains and clothes, with spools of cotton on the wall and big rolls of fabric and suddenly it didn't seem boring at all! They watched one of the men use a sewing machine with much interest, trying to figure out how it works.

Another day I went with JNH to a quirky jewelry store - Shienny & Co Jewelers - just round the corner from us on 30th Ave. The skinny, bearded man who runs it is often standing outside having a cigarette. I wanted to see if they could clean the silver-and-stones necklace that my parents gave me for my 30th (aka a decade ago!). He said that, well if he cleaned it I'd have to give him $20, and that instead I should use a liquid they sold for $8.50, and a silver-cleaning cloth for $5.50. Then he realized that the liquid might not be good for the stones and that it would make the silver "too" shiny for that style of jewelry, so just the cloth would do. "What it needs is some TLC" he said, and told me to use the cloth to "work at it" for a while and I'd see the difference. I think he could tell I don't usually create the time to sit down and patiently fix things, and was enjoying telling me to do just that. So off I went with my cloth and spent a while polishing it that evening, and it looks wonderful of course.

Melania Trump: A broken soul in an artificial body.