Since 9/11 beautiful clear days in NYC have an ominous tinge. One morning last week the sky was a pristine blue. The temperature was like body temperature with a slight breeze to keep things fresh. The city contents were enhanced by clean light: its skyward walls, yellow cabs, the passing faces of people weaving fast along the sidewalks etc. etc. All that beauty felt fragile.

Maybe that’s even more the case at the moment given that the tenth anniversary of 9/11 has just gone by, along with its saturated media coverage. I’d just caught snippets, thankfully, due to a 16-month-old JNH now permanently on the move. But I did see a bit of a documentary about the making of the 9/11 memorial, and in particular the bit about its trees.

They are about 400 swamp white oak and sweetgum trees. They’ve been cultivated at an arboretum in New Jersey, and must be among the most tended-to trees on the planet. Prior to their re-location to the memorial site each one had its own tub, with regulated conditions including a feeding and irrigation system. Each had its own perfect, private ecosystem carefully controlled by man.

There’s a video about the trees here.

In the big New York Times “Book of New York” – a collection of 549 of the newspaper’s articles about the city – there’s a piece from 7 September 1980 by Alfred Kazin, called “Hopper’s Vision of New York.” I love its last two paragraphs. Sometimes in the thick of the daily rush a piece of prose, a poem, or a painting holds things still. What I like about these two paragraphs is that they do that, while discussing paintings which do that too.

“...But there was one exception to the cozy, picturesque painters of New York: Edward Hopper. Unlike so many American paintings just before and after World War II, 'representational' and 'abstract' alike, his work was not slap-dash, hurried, theatrically self-conscious. The immensely tall, immensely quiet man I often saw walking in Greenwich Village seemed tensely alone; he reminded me of Virginia Woolf’s impression of Robinson Crusoe – 'a man staring at a pot.'

"Hopper for me was like his unprecedented paintings of solitary people staring at the glass in New York bedrooms, coffee shops and offices. Perhaps he had taken the advice of the philosopher Wittgenstein: ‘Don’t think! LOOK!’ Yet you could not have guessed what the handsome man was looking at as he edged his way through Washington Square park. His figures never looked through the glass they were facing. Their masked, identical hawklike faces were concentrated in thought unavailable to anyone, perhaps, especially to themselves.” 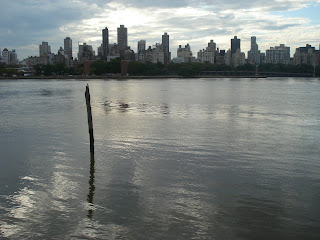