New York missive no 124: On fallible online maps and the purchase of a globe 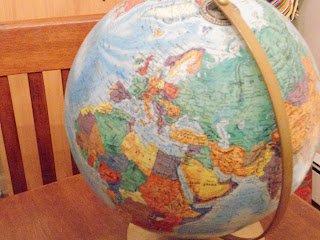 A friend recently described how she is in awe of Google maps for i-Phone. She had emerged from a subway stop in Manhattan, and unable to get her bearings flipped out the phone and checked her location on the map app. It promptly let her know she was walking in the wrong direction. I myself had been using Google Maps a lot recently – the online version – for a house hunt in Astoria (now temporarily put on hold). I would zoom in on a house for sale to get a feeling for the extent to which its real surroundings differed from those described by real estate agents.

Online maps can give a sense that they miss nothing. As Simon Garfield, author of the forthcoming book "On the Map: A Mind-Expanding Exploration of the Way the World Looks," said: “The uncertainty that was once an unavoidable part or our relationship with maps has been replaced by a false sense of Wi-Fi-enabled omnipotence.” His word “false” is key. Today’s maps may not be as prone to mistakes and omissions as the earliest ones, but they are no means free from them.

In November, a group of scientists set out on a boat to “Sandy Island”, about 1200 km off the coast of Australia. It appeared on several maps, including Google’s. When they arrived at the spot where it should have been, the island was not there. At first I wondered if that could be because of rising sea levels caused by climate change. It turns out that the island’s non-existence was likely the result of a different kind of human error.

A librarian at Aukland Museum (hooray for librarians!) found an early sea chart that implied the island was “discovered” by the whaling ship Velocity in 1876. The ship’s master had recorded “heavy breakers” and “sandy islets” in the area. The librarian, Shaun Higgins, believes that over time mapmakers may have started to consider those as a landmass. The sea chart had included a sensible disclaimer: “Caution is necessary while navigating among the low lying islands of the Pacific Ocean. The general details have been collated from the voyages of various navigators extending over a long series of years. The relative position of many dangers may therefore not be exactly given.” (That wonderful last sentence could apply to so many things beyond a map.)

I recently encountered the fallibility of online maps much closer to home. I wanted to get the name of the store at 34-03 30th Avenue in Astoria. Given my 30th Avenue blog, Alfred Holzman, who grew up along the Avenue in the 1940s and 50s invited me to a reunion lunch he had organized with 23 of his primary and junior school classmates, all now in their seventies. His Slovakia-born parents had run a paint and decorating store at 34-03, and the family lived above it.

When it came to writing up the story I wanted to include that detail, as well as what the store is now. I remembered it is a printing store but had not checked the name the last time I walked past. I lazily used Google Maps’ street view feature to get the name. “Prime Design & Printing |Prime Brokerage”, the image of the store sign on my screen read, and that is what I wrote. The next day I walked past and saw that it is now called simply, “Prime Design & Printing”. A minor change, but I corrected the story.

The two places – Sandy Island and Prime Design & Printing – are reminders that online maps, with all the sophistication of features like satellite imagery, give the illusion of presenting current reality while in fact they do not. Nothing is a substitute for being physically present in a place. Hopefully nothing ever will be.

That said, I did still buy an outdated globe the other day. My fascination with maps is still in tact. After all, it is their limitations and flaws that make them interesting, a bit like people. I was walking back from the 30th Avenue subway station to pick up six month-old CMH from his daycare. As always I was rushing to make sure I was there by six o’clock. I passed the store “Old Village Thrift, Gift and Antiques”, whose owner Sami Mobarak had been one of my 30th Avenue interviewees. Perched at the back of the cluttered table outside the store I glimpsed the globe. I asked Sami’s wife how much it cost and she told me $15. I said I would probably be back to fetch it the next day - I was in a hurry and carrying a lot of stuff. A few paces further along I found myself turning back to buy it. I was excited about giving it to JNH (now two and a half), and worried that someone might snap it up before me.

It reminded me of when my paternal grandfather turned up at our house one Christmas with a big box. I was about eight or nine. He told my sister and me that it had a monkey inside. I remember distinctly the feeling of disbelief combined with a glimmer of hope that maybe, just maybe, he meant it, and there really was a monkey inside. My heart beat a bit faster as we opened the box. And it sunk with disappointment when we pulled out a globe, even though it was the kind that lit up when you plugged it in.

Over time the globe grew on me, as the excitement about the monkey-that-wasn’t waned. My childhood friend E and I spun it around to choose a place to “travel” to in our games, taking colored candies along as our malaria tablets. When I was old enough, my real globe-trotting tendencies kicked in. I wanted to feel the places on maps in the flesh, albeit becoming increasingly aware that passing through somewhere does not provide a taste of living there. There is a certain sameness to experiencing different places as an outsider.

JNH is delighted with his globe. He calls it his “gloobe", for some reason. He is learning to point out where he lives – New York – and where his grandparents and aunts live, scattered as they are between the UK, Switzerland, Florida and Dominican Republic. There may come a day when he asks what that big green country labeled “Union of Soviet Socialist Republics” is. Or why South Sudan does not feature. That will present a good excuse for a history lesson: on how the way things are portrayed is not what they are. And on how the way things are one day, they may not be the next. The week before Christmas. People were buying more than usual: not only more things, but bigger quantities. That was evident in 30th Avenue’s Trade Fair supermarket the other day, when the guy in front of me bought 20 bunches of cilantro (total $15). Up the road in International Meat Market, where despite there being plenty of other butchers along the street everyone goes and endures the consequent long queues, a woman called April who seemed to know everybody bought eight huge marrow bones to turn into stock.

Christmas, it seems, is about trying to re-create the best elements from your childhood experience of it, finding they turn out differently, and then realizing that’s the whole point.

Our Christmas so far has included a mix of things from my childhood and from C’s. On Christmas eve, we ate pernil – Dominican-style roasted pork – that C had marinated for a day and half beforehand in garlic and spices: the result, juicy and delicious, served up with rice, beans and plantains.

Then this morning, after JNH and CMH (with the former’s help) had dug Santa-delivered presents out of the the army socks that my grandfather had worn in World War II and that my sister and I had always used as our Christmas stockings, we had a britishy brunch of scrambled egg and smoked salmon on brown bread (washed down with a glass of champagne), albeit to the accompaniment of Merengue.

Right now, while JNH and CMH are very rarely both asleep at the same time and C is out at a basketball game, I've turned on BBC World service. (I should be catching up on sleep myself, but there's always that trade-off between using those quiet moments for valuable "me"-time or loosing them to much-needed sleep).

We’re spending the afternoon at L and A’s place near Central Park, with a bunch of others. There, no doubt, will be traces of their Armenian and French upbringings mixed into the proceedings.

Recently we’ve had two five-day periods without internet and cable TV access. Not because of hurricane Sandy, but because trucks from the construction site opposite had sliced through the cables that run from our home to the other side. Here in Astoria pretty much all the communications and power cables are above ground, with the resulting tangled messes, and tied-together pairs of shoes caught up in them, flung by party goers on their ways home.

Being offline had the combined effect of freedom and isolation. Without emails to check, websites to surf, online videos for JNH, TV to watch, we had to speak to each other! And found plenty of ways to entertain ourselves, as well as ways around the supposed information-deficit. I bought a newspaper. When we couldn’t access our online music lockbox, we played CDs. I even proposed to C that we have a self-imposed offline day each week from now on, which didn’t go down well. And of course as soon as we got hooked up again, on went the gadgets and consumed our attention, as if we were glugging a relieved drink after passing through a media desert. (Which anyway had not been the case, as we’d both been online at work during the days).

The fact the cut off was the result of a fallen cable is a reminder of the physicality of cyberspace. With features like “cloud computing” it’s easy to think that the internet is intangible and consequently has a light environmental footprint. Of course that couldn’t be further from the case, as this NYT article “Power, Pollution and the Internet” makes clear.