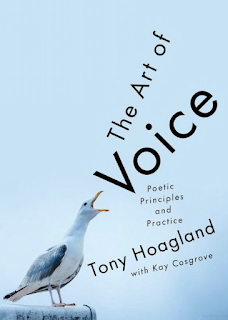 Three things yesterday made me think of “voice”. As in, written voice.

One very literally so. I was scrolling through those “recommended for you” titles that pop up in Kindle. There was Elizabeth Strout’s new short story collection, no doubt because a friend had WhatsApped me about it, and in that freaky Amazon-knows-absolutely-everything-or-at-least-thinks-it-does way, Kindle thought that I might like to buy it. There were a bunch of books with “Platform” in the title, probably because I had recently bought a book on platform economics. And then there was “The Art of Voice - Poetic Principles and Practice”. This one – with a photo of a squawking seagull on the cover and that phrase coming out of its mouth - drew my attention immediately. Then the fact that it had drawn my attention, drew my attention further. I read the sample, then bought the full thing. It’s by poet Tony Hoagland, with chapters like “Showing the Mind in Motion”, “Whose Voice is It?”, and “Voices Borrowed from the Environment”. Right up my street.

Another instance was earlier in the day, as JNH worked on his "book". These stay-at-home days while the Covid-19 pandemic ravages NYC (in so many ways) have have their tough times. Like when C was in bed with a fever and cough fighting COVID. On one particular day he emerged looking like just a shell of himself. Luckily he's better now, and his breathing never got to the point he had to go to hospital, which is what we dreaded. There have also been unexpected beautiful moments, which emerge from the fact we’re spending so much time together at home. JNH said he wanted to start work on a book. He wanted to do it on the computer (screens have become all-the-more central in their lives because of online learning), but as he's slow at typing, I said I’d help: JNH dictating and me typing. Called “Knights in Fantasy”, so far there is a great deal of scene-setting, with detailed descriptions of the various monsters and knights that will appear in the tale - characters who are inspired by his toys. I flash-backed to the “novel” SeeWich that I wrote (in blue ink) when I was around his age, two-thirds of which involved the exciting journey up the golden steps to the magical land of SeeWich, leaving not a lot of room for the SeeWich adventure itself. Still, JNH's character descriptions are vivid and entertaining. And, most important, there’s a unique voice that comes through, the voice of a ten-year-old enjoying being authorial while not thinking too hard about it.

“Creativity gives you power,” he says in the opening paragraph. “And you must find ways to channel that power. My preferred way is making my ideas out of the toys I own.” And, regarding the Livivan Tree: “I am not writing about this tree because it is the tallest in the Mystic Universe (because it’s not). It is because these trees are ‘alive’. ‘Alive’ meaning moving and groaning. They have a spirit.”

It’s hard to put into words what the voice is like. As Hoagland says at the opening of his book, "One of the most difficult to define elements in poetry is voice, the distinctive linguistic presentation of an individual speaker." Hard to describe and mighty powerful.

The third instance was in the evening when I dived back into the novel I’m reading at the moment, “Girl, Woman, Other” by Bernadine Evaristo. K sent it as a birthday present back in January: little did we know at the time that it would be part of my lock-down entertainment. At that time, just the first part of the outbreak was breaking out, in Wuhan. Each chapter is about a different person - most of them women, most black, and all, so far, conveyed in third person. Each has an utterly distinctive and immersive voice, so that you are within the character's experience. It's something that only a mighty skilled writer can make seem effortless on the page - even though "voice" surrounds us every day. No wonder that Evaristo was one of the winners of last year's Booker (the prize was split between her and Margaret Atwood).

As I write this, I can hear three sounds: the boys kicking a ball around, birds singing, and sirens.

Particularly worried about our elderly next door neighbors G and J, though so far G says that they are ok. The boys climb over the fence into their garden to fetch their soccer ball when it goes over (often). Their garden's wild and overgrown, with the odd hyacinth and daffodil poking through. One time - no idea if it was last week or the one before as my sense of time is out of whack - CMH came back carrying the most wonderful branch. He gave it to me as a present, making my day. So many comparisons came to mind - a stag's antlers, the spindly arms and fingers of Roald Dahl's Witches (more strictly speaking Quentin Blake's), and sinister scenes from the Blair Witch Project. I've kept the branch propped up against a wall outside, and it brings a smile to my face each time I see it. 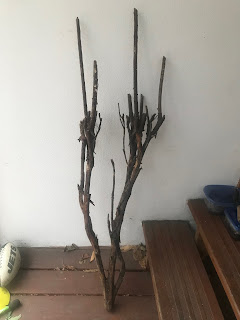