New York missive no 136 - A rock monster, and Mack the Knife 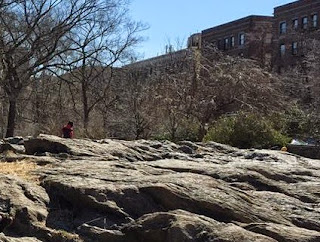 Last weekend Dad was visiting on his way back from one of his three-week work trips: this time Colombia and Orlando, Florida. On each day of the weekend we went to a patch of the city packed in a different way with dense layers of memory.

I’ll start with Sunday. We took the M5 bus all the way up Riverside Drive to Washington Heights where C grew up. The trees were still leafless so the Hudson was clearly visible through a lattice of gray branches, unlike Summer when thick foliage obscures it. We got out at Fort Washington and 172nd, and walked to the apartment building at the Western edge of 171st where C lived for the first four years of his life, while his parents were still together. Just down the street was “El Peligro.” It’s a ramp on the side of the New York Presbyterian hospital (where C was born), that he and Z would run up and down. E would warn them they’d get in trouble with security guards, telling them it was “peligro”, which of course just heightened the appeal.

Manhattan is narrow at the top, a tough rock promontory squeezed between New Jersey on the West and the bottom of the Bronx on the East, separated by river and joined by bridges. We walked up Haven Ave, past a half-built Columbia University medical school building. The rendering on the hoarding showed that it will be a transparent glass and steel tower with jagged angles, utterly different from the stoney-faced apartment buildings nearby. We reached the park. The map says it’s called J Hood Wright park though for C it’s “the park”.

Some features were new, like a dog run. Others were not, like the exposed schist rock where the land shows what it’s made of. Those rocks were formed 450 million years ago. They are perfect for clambering on. C and Z climbed on them as toddlers, and now CMH and JNH did, and we followed. It was bitterly cold (still, at the end of March!). The boys’ brightly colored winter hats stood out against the rock. The rock, too, had its own brightness: the gray glistened with flecks of mica. CMH determined that a small hump of the rock that stood somewhat separate from the rest was a “monster”. Not a bad monster – he kept running back to it, calling “Monster! Monster!” and giving it a hug.

On Saturday we took the 7 train to the Louis Armstrong House museum in Corona. In 1943 Armstrong's wife Lucille (his fourth, and last wife – he said she gave him more than the three others combined) bought the house without Louis knowing. He was always on the road on tour. When she gave him the address and a taxi brought him to the front door, the story goes that he told the taxi driver he must have got the wrong address. Such a big house couldn’t be his own. He had been brought up in a poor district of New Orleans known as “The Battlefield”, and now, despite earning half a million dollars a year and being able to afford a huge mansion if he’d wanted, he couldn’t conceive that this was his home.

He and Lucille lived there for the next thirty years, until Louis’ death in 1971. It has been kept as they lived in it, and guides show people around accompanied by recordings of Louis speaking and playing. In a rare interview in 1983, Lucille Armstrong said something along the lines of “Louis is still everywhere here”, and it certainly feels that way. They didn’t have children of their own, but when he was home from touring Louis spent hours with the children who lived nearby, playing his trumpet with them on the stoops. Photos of them are in his den on the second floor, along with recording equipment, and paper where he wrote down what was on the cassettes he recorded. Each would end with the words "s'all".

Soon before Louis died, they bought two adjacent lots and turned them into a stunning square garden wrapped in brick walls, shaded over by trees. CMH – who conveniently slept while we toured the house – grabbed the trunk of a conifer and shook it gently so that the previous day’s snow splashed down.

Dad had introduced JNH to the song “Mack the Knife” the previous evening. We were listening to the song and reading the lyrics, which piqued JNH’s interest, which somehow then led to us watching a video of Rubén Blades’s salsa homage to the song, "Pedro Navaja". JNH was startled when Mack knifed a man in a dark alley (we stopped the video at that point) so I had to explain that he was only acting. Mack keeps popping up in conversation now. So-and-so is a bad guy, he'll say, but "not as bad as Mack the Knife."