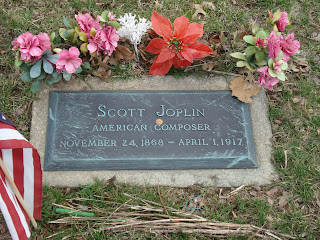 One of the pieces in “Forgotten borough – Writers come to terms with Queens” is Marc Landas' "A Queens Necropolis: The Burial and Building of New York." It starts with a fabulous description of boats in the mid 1800s bringing the dead from Manhattan over the East River and up Newton Creek to Calvary Cemetery in Queens.

Queens is full of cemeteries that received waves of dead from Manhattan: produced simply by the expanding population, or the revolutionary war, or outbreaks of cholera – and that are now still in use for Queens residents.

C, JNH and I went to one of them yesterday morning. St Michael's Cemetery is an 88 hectare triangle of land that hangs down from the Long Island Expressway as it slices its way from Astoria to La Guardia airport.

We’d planned to spend the day doing something special. I’d come up with various options in Manhattan then tagged “or we could go to see St Michael’s cemetery” on the end. C knows my fixation with cemeteries. He said he thought that was probably what I really wanted to do and he was right.

We got the M60 bus a couple of stops to the cemetery and wandered in. We found ourselves in the midst of a funeral. A crowd of South Asian mourners was congregated outside the building where we slipped in to ask for a map. They didn’t seem particularly sad though. The gathering felt almost like a celebration.

We guessed that perhaps the dead person had been a taxi driver with an extended network of friends and colleagues who liked and respected him and who had come to send him off but were not as affected as close family would be. Some of the mourners had big SUVs which they stood next to proudly. It was a very Queens scene.

The young woman in the office must have been a bit surprised to see us there, baby in a papoose, requesting a map. “Are you looking for the grave of anyone in particular?” she asked.

“I wouldn’t mind seeing Scott Joplin," I said. I’d heard that he was buried there. “And if there are any other noteworthy graves...” Though I didn’t really mind if the graves I was looking at were of famous people are not.

“No, he’s really the only famous one here,” she said with the strongest New York accent I’ve ever heard, and a little loudly for my comfort given the funeral gathering next to us. “But Scott Joplin is very easy to find…” She pointed us to a beige SUV and told us it was on a corner just beyond it, with a little American flag marking the spot.

And I loved the higgledy-piggledy authenticity of the rest of the cemetery. There were few ostentatious mausoleums and fancy statues (it was founded in 1852 by the Rev. Thomas McClure Peters who wanted to "provide a final dignified resting place for the poor who could not otherwise afford it", according to the cemetery website).

There seemed to be little rhyme or reason to the layout of the cemetery though maybe we were missing it: there are old gravestones close to recent ones, some are clustered closely together and others are spread out.

The stones echo the waves of immigration to New York and particularly to Queens. There’s an Irish name next to an Italian name, next to Greek next to Chinese next to Puerto Rican. What a story, what stories, the cemetery could tell. Yet unlike Woodlawn Cemetery in the Bronx and others with their detailed tourist information, even tours, St Michael's seems to exist un-narrated.

The stories of the people who are buried there are merely hinted at by the minimal details on their gravestones.

From St Michael's we wove by foot and bus down to Woodside where we feasted on what must be the best Thai food in New York at SriPraPhai – one of those much-hyped restaurants whose hype is totally justified.

San Francisco and New York, two cities that other than their liberal leanings couldn’t be more different. We spent five days in San Fran taking JNH to see his tia Z, who has lived there since she was posted there with the army (now she works with kids with learning difficulties).

If you project the two cities to the future then San Fran is the clean, green machine city with purring hydrogen-fueled air-taxis and New York is the apocalypse, in a good way. I say in a good way because I’ve got so used to its pulsing chaos and endless surprise that San Fran felt too pristine and smooth. (That impression was probably amplified by the fact our hotel was in the swanky Mariner district. San Fran does have its rough edges, but they seem to be segregated from the bulk of the city rather than infusing it as in New York).

That said, we had a good time. Z has a car and we spent the first day moving from district to district: up to admire the view from Twin Peaks, down to her place in Bernal Heights, up and down to Mission for Peruvian fish, up and down again to Dolores Park...next day over the Golden Gate bridge to Napa Valley, then day three downtown and Fisherman's wharf...we crammed a lot in.
Posted by Annabel S at 6:17 PM No comments: