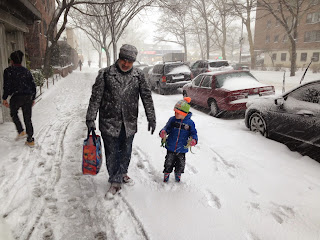 On the morning before the great blizzard of 2015 (declared historic before it happened), I dropped off the kids, and, as flakes began to fall, went to a supermarket on my way back home. I had decided not to go into the city to work in case the storm kicked in early.

I found myself not only buying food for two meals, but also, randomly, Apricot jam. The 24/7 news coverage and warnings of “do NOT leave your home” had had an effect. I needed that jam, even though I’d not eaten jam for years. It was Bonne Maman, the kind with the red and white-checked table cloth pattern on the lid. When I was young I thought we could only get in France, and it was special. Now it’s hit the Astoria supermarket shelves, the latest brand meme clustered in stacks by the checkouts.

In the end the mighty blizzard wasn’t mighty after all. Just a foot or so (Boston got hit much harder). But still, those two days ran as if in slow motion. They capture some of the little details that compose our lives at the moment.

C and I went together to pick up the boys around 4pm, two hours earlier than usual, for the half-hour walk back home. The snow flew hard and fast, the wind threw it into our faces. JNH talked all the way, saying I hope it’s not the end of the world, and maybe we are at the bottom of the earth but then where are the penguins? CMH was strolled. He sat behind the rain cover peering out with an intent expression.

Back home C cooked fish stew, while JNH and CMH stuck small colored pieces of paper onto white paper and drew around them. When I had explained to JNH how movies are made he had wanted to feed drawings into my computer to make them move. After initial disappointment that that is not how it works, he settled with the idea of cutting out small images and sticking them onto a plain page, to make his own “movies".

At some point I went to the corner store on 30th Ave to buy something, I can’t remember what (beer?!). “Of course we won’t be closing” said the South Asian guy who runs it. And one of the Mexican flower sellers was STILL there by the flower stall that runs down the edge of the store enclosed in clear plastic sheeting. Were people really going to be buying flowers during a snow storm? Ligia's Alterations, the dressmaker's with faded yellow décor, was closed.

Our block is a bit of a time-capsule. It’s a sliver of old Astoria that clings on while the neighborhood around it gentrifies and changes. T, who lives next door, told me how when he was growing up in the same house, all the back yards were connected to each other by a pathway, the children running from one to another.

He’s still here, with his wife (sons are grown and left home now), and his brother-in-law who is usually in an alcohol-or-something-haze. While the “Don’t tread on me” and Tea Party slogans in their front window make me think the less interaction, the better, a note that T put in our letterbox about finding contractors in the neighborhood had a wounded veterans’ organization logo, which in turn made me think maybe the brother-in-law is a veteran, and that maybe he has more interesting stories to tell than most people, if the conversation goes beyond a hello sometime.

Next door is an elderly Greek couple G and I, and beyond them, M, a portly woman in her sixties who wears sweatpants, a purple anorak and baseball cap, who has also lived on the block forever it seems and always knows the comings and goings.

The following morning we awoke to piles but not mountains of snow. C coincided with other neighbors in shoveling it off the sidewalks. Daycare was closed so I was working from home – a morning of back-to-back Skype calls, as often happens when I’m working from home which makes C comment that all we do in our work is talk (only partly true). Then a break when the boys spilled out into the backyard pounding through snow that reached up to knees in JNH’s case, practically hips for CMH.

G and I next door have let their garden overgrow so it is full of bushes and a sprawling tree. A couple of days earlier we had seen a striking bright blue bird there. “That’s a blue Jay,” JNH said. I’d never seen one before and wasn’t sure, so looked it up later and sure enough it was. His latest cartoon obsession is Wild Kratts, in which the two zoologist Kratt brothers Chris and Martin mix up sequences of being in the presence of real animals, with sequences when they become animated characters that assume various "creature powers". Like flying at the speed of a peregrine falcon. When we saw the brothers live at the Bronx Zoo this summer, tía D, visiting from Santo Domingo, concluded that they must be gay. Why that's so and why it would be an issue if it is, was unclear.

JNH regularly spouts animal trivia. “We have to be careful of the poisonous copperhead." "Mami, the Tazmanian Tiger is extinct,” etc. Yet it goes beyond that - he’s genuinely concerned for nature it seems. This week he wanted to write a letter to the bad guys, telling them to turn their guns and machines into factories that can make salami, chicken and paper out of things other than animals and trees.

Lunch, more work, then late in the afternoon the four of us went down 30th Avenue for errands. The atmosphere was quiet and festive at the same time.