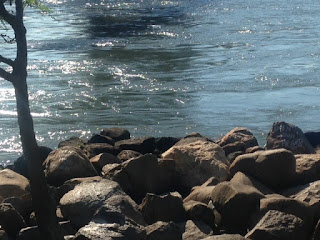 Zoom in and you'll see the writing on the rocks

There are two rocks on a promontory jutting out into East River at the Northern end of Astoria Park, with writing painted on. One of them says “Open your hearts.” The other says “Open your mind.” I like how hearts are plural and mind, singular.

I come across them when I go on my regular run. By the time I reach the rocks I’m usually panting and it’s a good place for a stretch. I read them, and watch the river churning.

It’s near here that engineers blew up underwater reefs in the 1870s and 1880s to make the passage smoother for ships. They dug tunnels through the reefs and stuffed them full of explosives. Jets of shattered rock and water towered into the sky while onlookers stood on nearby rooftops. Only an occasional boat comes down here now. A scruffy tug or a yacht juddering against the currents.

Once when I was standing near the rocks two women and a man were there too. East River is tidal, and a small area of beach was exposed below us. “Sea glass!” the man called out. “Is it? Yes! I really think it’s sea glass!” He climbed down onto the beach to take a closer took and snapped pictures with his cellphone. “Katlyn would have loved this!” he said.

“Who is Katlyn?” I wondered. Then randomly perhaps, “Is she still alive?” “Why would she love sea glass so much?”

I never knew that sea glass is a thing, but it does make sense that it is. Glass that has been curled and washed so long by salty waves that it’s smooth like faces. When a boat's wake laps over the glass it makes the sound of tinkling coins.

Thoughts ramble just as they do when I run. They tick away and merge with my breath. Running is a good way to sift thoughts. Relevant ones surface, and irrelevant ones get sweated out.

Some days I run at the track in the South of the park for a while. It’s always a kaleidoscopic scene. A small girl, about seven, in fluorescent yellow shorts jogs with her Dad then sprints off so fast for the last stretch it transfixes onlookers. Women in hijabs walk and talk while their sons do laps. In a dusty patch in the middle of the tracks, a circle of capoeira dancers right next to a group of break-dancers keep their music at the right volume to drown out the other. A Latino coach instructs 20 students lined up on their backs along one side of the track, their legs stretched skywards.

Other than midwinter and mornings of course, when it’s much quieter. One time, early morning, the track was deserted. I reached the river while it was still dark and a film crew was starting to set up for the day. The driver of a parked film truck slept at the wheel, maybe after driving several hours to get there, catching some rest before the start of the day.