New York missive no 69 - When Nietzsche Wept, and a crisis about "stuff"

Then in 2003 Yalom was sent a letter in which one of Nietzsche’s friends, the poet Siegfried Lipiner, tries to convince another friend, Heinrich Koselitz, to send Nietzsche to Vienna where he would receive treatment for his mental and physical sickness from Doctor Breuer. In his reply Koselitz advises against the plan. But the letter shows how right Gide was – that fictionalized event was on the verge of happening in reality. And it is a reminder of the dizzying number of possibilities that lie in fiction. If the fiction that is already out there tells of things that could have happened, how many more “could haves” are contained in fiction that has not yet been written?

This apparently infinite number of possibilities seems to contradict Nietzsche’s theory of eternal recurrence that he describes to Breuer (in the book). They are walking through the cemetery where Breuer’s parents are buried. Nietzsche says that because time stretches infinitely backward for all eternity, everything that can happen must have already happened. Therefore every time you choose an action you must be willing to choose it for all eternity, because at some point in the future it will happen again. “What is immortal is this life, this moment…This moment exists forever,” he says. But perhaps this moment, the now, bears so much weight not because it will infinitely repeat itself, but because it may never happen in reality again.

A sign of my addled mind (I like to think pregnancy-induced addledness): in my diary I’d noted “C-boxing” for last night, because there was a boxing match he wanted to watch. Then in the Sunday space, I’d put “1pm – boxing”. It should say “1pm yoga” but I guess I just caught a glimpse of the word boxing in the previous box and copied it. So apparently at 1pm today I’m going to a pre-natal boxing class. I’m picturing lots of pregnant-bellied women hopping around the ring, gloved hands to chests, taking swipes at one another.

Soon after we moved to Astoria I got home from a fruitless search for a mop and had a bit of an emotional crisis about “stuff”. I’d been looking in the nearby $ shops and suddenly felt overwhelmed by the amount of stuff out there to buy – which is a bit contradictory given that I’d been in the shops because I needed to buy something. “There’s just….there’s just….so much...STUFF. Too much STUFF!” I sobbed.

Recently my concerns about stuff have taken a more practical turn.

There is more and more stuff in the world (conveniently yet inaccurately extricating myself in that phrase from responsibility for generating more demand for stuff ) – and yet it comes from increasingly limited sources. We watched FoodInc recently, a powerful documentary on the extreme concentration of the food industry and the horrendous consequences of that concentration for people’s lives and the environment. I’m immersed in these issues for my work yet reminded myself there’s so much I should be doing to live the change I want to see in the world, and not use living in a megacity as an excuse. So off I’ve been the last two weeks to Union Square farmer’s market to buy real food (beef that has been fed on grass, for example), finding myself forking out a small fortune to pay the real price for that real food. It’s a worthwhile investment though, when you think that the cost you save by buying mass-produced food is still there, but is borne by the workers and land down its supply chain. I’m not going to switch to 100% perfect purchasing (could there ever be such a thing?) overnight but figure that each product I buy carefully, knowing the source, is a step in the right direction. And I know that eating right doesn’t have to cost a fortune either –time to get those vegetable and herb plants planted on our balcony. Start a balcony-to-balcony food revolution in Astoria?...

Then there's a pending deluge of baby stuff. So far we’ve resisted going overboard and haven’t stepped foot in a Buy Buy Baby or Babies R Us. But as with food it can seem that the choices are to buy cheap from a mass-production conglomerate or buy very expensive from niche sources. Or, adopt a balancing act – a combination of investing a few things that matter (one of which was the moses basket for him to sleep in the first few months, I decided), minimizing other things, exploring alternative marketplaces like Etsy, using some things second hand (though I’m not sure whether the nightgowns from the 1800s that Mum found in her attic, passed down over the generations, will survive another wear!), and then accepting stuff, of course, guilt-free, when it’s given us by others...(!)

Turns out that the tree outside our window is a pear tree. Which I really should have recognized from last Spring – see New York missive no. 49
Posted by Annabel S at 3:02 PM No comments: 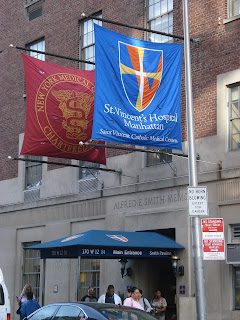 Last night we were supposed to be going to St Vincents for a free tour of the maternity ward. But the woman running it called in the afternoon to say it’s been cancelled because the hospital is closing – the hospital board announced the closure on Tuesday and it’s happening pretty much right away. So that’s that. 160 years of treating the population of lower Manhattan, and now the buildings will probably be turned into just more expensive apartment buildings. I came home via the hospital to see what was going on and passed a nurses protest – 800 will probably lose their jobs. Their placards summed up the situation well. “Condos don’t save lives," said one.

Round the corner I spotted a plaque on the wall about the poet Edna St Vincent Millay, where I learned that she was named after the hospital: 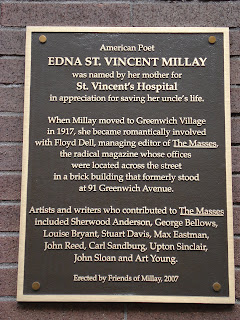 So our little Dobritican (the word C came up with for Dominican-British-American) will have to come into the world elsewhere. At the moment it’s looking like New York Downtown Hospital in the financial district. The description of its maternity ward sounds a little condo-like itself: “New mothers deliver in the Hospital's beautifully renovated, state-of-the-art Maternity Center, which is equipped with attractive, family-oriented suites for labor and delivery.”

But I won’t pass judgment too quickly. I’m sure all will be well and my obstetrician, who won’t change, will give us all the control we need over how the baby’s born. 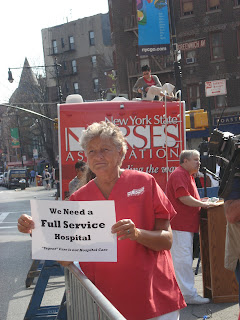 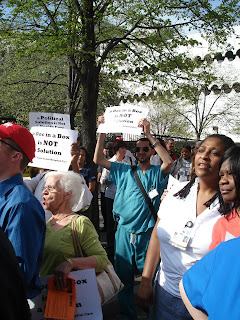 New York missive no 68 - God and the lack of

On Monday the midwife we saw said how relieved she is that the maternity ward at St Vincent’s Hospital is probably staying open. Not only because it means the nurses there will keep their jobs, but because, she said, it’s one of the few remaining obstetrics wards in New York where childbirth is still seen as a natural process, to be celebrated, rather than an encumbrance to be dealt with as quickly as possible with the aid of cesarean deliveries and pain relief methods. Long may it last.

Oh well I spoke too soon. Just after typing that last night we turned on the news to see that the latest deal to save the hospital - with Mt Sinai Hospital - has fallen through.

Everyone seemed to be reading about God this morning on the W train, while I was reading about Nietzsche. Not about him, exactly, but Irvin Yalom’s novel When Nietzsche Wept. It revolves around Nietzsche's fictitious treatment by the doctor Joseph Breuer in late nineteenth century Vienna, when, as Yalom describes in his note at the end, the “ticking embryo of psychotherapy” was in place. There is much discussion between the two about truth, and some about God, or the lack of. So far those discussions are driven by Nietzsche’s alluringly honest skepticism and Breurer’s battle to counter it. Breurer presents it as debilitating, even though to himself he acknowledges that he shares much of Nietzsche's beliefs and just is not brave enough to wholly embrace them. Or resists embracing them, so he can continue to pursue the semblance of a stable life. “Truth,” says Nietzsche at one point, “is arrived at through disbelief and skepticism, not through a childlike wishing something were so!” And “Surely, you must realize that we created God, and that all of us together now have killed him.” The woman to my right on the train was reading the chapter of Mary Kay Ash's autobiography called “God first, family second, career third.” And the man to my left, a book called “Learning God’s ways.”

Along the boardwalk at Brighton Beach the other weekend mothers pushed children in strollers and care-givers pushed the elderly in wheelchairs. It seems we start and end life being pushed around on wheels. Or to go even further back and forward, start and end life plugged into life-support machines – dependent. 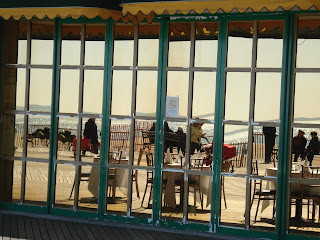 Well Spring is in the air but those three entries are not particularly cheery. Time for a snooze.
Posted by Annabel S at 7:02 PM No comments: