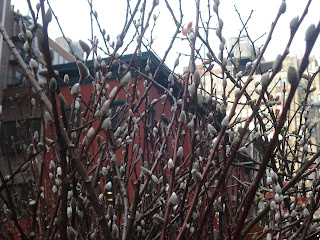 This time two years ago was C's and my wedding day. Like today it was a cold day with a bright, clear blue sky. Then, there was still snow on the ground from the previous week.

The pussy willows sold along 28th Street at this time of year always remind me of the wedding. Four big pots of them decorated the venue - a fabulous wedding contribution from sister P.
Posted by Annabel S at 9:45 AM No comments: 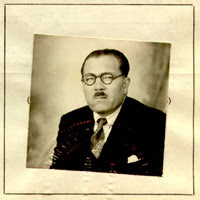 The subtitle of the “Memoirs of Bernardo Vega” is “A Contribution to the History of The Puerto Rican Community in New York.” What a contribution. Vega, a ‘tabaquero’ (cigar maker) from the Puerto Rican town of Cayey, came to came to New York City in 1916 and lived there until the 1950s. The subtitle wording is typical of the modesty with which he approached the memoirs. In fact he originally wrote them in the third person as a lightly fictionalized account. His editor César Andrew Iglesias, who published the memoirs 10 years after Vega’s death, was the one who convinced him that it made much more sense as a direct memoir of his own life.

Vega describes his experiences in the city’s cigar factories, and grim stints in other professions when that work was hard to come by: in a munitions factory, in an underwater cellar making antiseptics, as an assistant then accountant to an abusive rag trader, for example. He talks about his involvement in socialist and union movements, the city’s Spanish-speaking newspapers and his ownership and editorship of the paper Gráfico. At times the narrative is choppy, probably because of the switch from third to first person and his motivation to tell a much broader story than this own. In a 1955 preface he had said “an honest recollection was needed, a memoir telling of how Puerto Ricans have lived and what they have accomplished in New York.”

So while his work and politics play an important role, his personal life barely features. A couple of wives and two children by the first just get fleeting references and are not named. With reference to the first wife he says, “Here I must insert a very personal note: I married a Puerto Rican girl. This, of course, has nothing to do with anything…” Meanwhile people involved in political struggles are sometimes listed in dense paragraphs of names as if to be sure that everyone he respected had at least a mention in the book. A portion early in the book switches to the perspective of Vega’s uncle Antonio, in order to tell the story of Cuba and Puerto Rico’s struggle for independence from Spain and the role played from New York.

The last chapter breaks off after just a page as Vega is about to get involved with Henry Wallace’s Progressive Party (he worked as national director of the party’s Hispanic section while Wallace ran for the presidency). The chapter’s title is “An unfinished chapter with an unwritten moral: it is always more interesting to live than to write.” Thank God he did write. Through the choppiness of the narrative comes a deep portrait of a particular community at a particular moment in time. A portrait that as I read, I was acutely aware would not have been recorded, at least in nothing like the same detail, had Bernado Vega not decided to set it down on paper.

Here are some excerpts just to give a glimpse. On “readers” in the cigar factories:

“A few days later I found work at another cigar factory. ‘El Morito’ (‘The Little moor’), on 86th Street off Third Avenue, a few steps from where I was living. At that wonderful place I struck up friendships with a lot of Cubans, Spaniards, and some fellow countrymen, all of whom awakened in me an eagerness to study…

“At that time the official ‘reader' was Fernando García. He would read to us for one hour in the morning and one in the afternoon. He dedicated the morning session to current news and events of the day…The afternoon sessions were devoted to more substantial readings of a political and literary nature…It used to be that a factory reader would choose the texts himself, and they were mostly light reading…But as they developed politically, the workers had more and more to say in the selection. Their preference for works of social theory won out. From then on the readings were most often from books by Gustave LeBon, Ludwig Buchner, Darwin, Marx, Engels, Bakunin…And let me tell you, I never knew a single tabaquero who fell asleep.

“The institution of factory readings made the tabaqueros into the most enlightened sector of the working class. The practice began in the factories of Viñas & Co., in Bejucal, Cuba, around 1864. Of course there were readings before then, but they weren’t daily. Emigrants to Key West and Tampa introduced the practice into the United States around 1869- at least, I was told that in that year the shop owned by Martínez Ibor in Key West had an official reader.” (pg. 22-3)

“By that time 15 million workers were unemployed. New York was one of the cities most seriously affected. The winter of 1932 was particularly harsh, and in the middle of February the whole city was blanketed in snow. Around twelve thousand men were hired by City Hall to clean up the streets. Many Puerto Ricans jumped at the opportunity to make some money, and what a sight it was to see them all wrapped up in rags, their necks covered with old newspapers, swinging their shovels and shivering to the bone.” (pg. 170)

During WW2 Vega worked in the postal censorship office, first reading soldiers’ letters home to their families then in the “international department”, where among other things he kept a file on Nazi agents in Latin America. Of the Puerto Ricans working there he says:

“There were over a thousand Puerto Ricans working in postal censorship in New York. For the duration of the war not one was promoted to an executive position of any standing…[O]ver 80 percent of the Puerto Ricans who applied for employment at the censor’s office and took the Federal Civil Service examination demonstrated a command of at least two languages, as well as other qualifications. No other nationality had such a high average. On to top of that, I can attest to the magnificent work performed by our countrymen. And yet we Puerto Ricans are still regarded as in incompetent people who never reached maturity…The truth is that those of us who get anywhere in this country must be superior to our equals.” (pg. 208).
Posted by Annabel S at 8:42 PM No comments:

C’s poem about Christopher Hitchens ends with the lines

The thing about death
is how efficiently
it silences.

Those lines sprung to mind again on my N-train subway commute the other morning. Two people along from me a woman was listening to Whitney Houston at full blast on her headphones. It was a couple of days after Houston had died, and there was her distinctive voice accompanying Queens-dwellers on their way into work: I Will Always Love You, I Wanna Dance with Somebody (Who Loves Me), Where Do Broken Hearts Go? The woman with the headphones wasn’t crying but was visibly upset as she listened. It annoyed me how little notice everyone took, or at least how consciously they seemed to be pretending they couldn’t hear.

On one hand it was a reminder that artists secure some kind of afterlife through their creations; they can be read, listened to, watched, after they have died. But that also makes death's silencing all the more dramatic. The carriage was full of an immensely powerful voice that would never sing again.

I then noticed that the woman sitting in between me and the Whitney Houston fan was reading Hitchen's autobiography Hitch 22, published soon before he died last year.

That’s two rather morbid posts in a row. I’m five months pregnant. I wonder if that has anything to do with it: amplified hormones and all that.
Posted by Annabel S at 6:31 PM No comments:

The New Yorker published a big piece by Ian Parker recently called "The Story of A Suicide - Two college roommates, a webcam, and a tragedy". One of the roomates is Tyler Clementi, the gay Rutgers student who jumped off the George Washington Bridge in 2010. The other is Dharun Ravi who is currently facing charges including invasion of privacy and bias intimidation (hate crimes). He and another student used a webcam to watch Clementi in an embrace with a man. Ravi talked about it on Twitter, and then two days later attempted to set up another viewing, inviting others to join in. Of course the precise causal link between the webcam spying and Tyler’s decision to jump will never be known.

What struck me most about the article was how much of a person remains unknown, even to those closest to them. Tyler’s parents say that they never saw signs of depression in him. The article ends with this paragraph:

On the night Jane Clementi learned that Tyler was gay, she said, “I told him not to hurt himself.” Not long before, a girl from his school had committed suicide. “We had talked about it briefly that summer, and for some reason that thought came to mind. And all I said was ‘Don’t hurt yourself,’ and he looked me right in the eye and he laughed, and said, ‘I would never do anything like that.'"

On my walk back from the subway station after reading the article the paragraph hung with me. My thoughts went riffing beyond this case to the way in which we never know others’ minds.

What do we do inside our boxes? Accept that we don’t know at all what goes on inside others’? Or do our best to know? Try to reach over and inside, in the full awareness that we can’t really know?

The process always comes back to yourself, like it or not. What you think you learn when you reach over – whether right or wrong – ultimately comes from your own box and back into it. But it’s worth the effort. Something changes on the way; what returns is more than a reflection.

And this is one of the reasons we write.
Posted by Annabel S at 7:16 AM No comments: