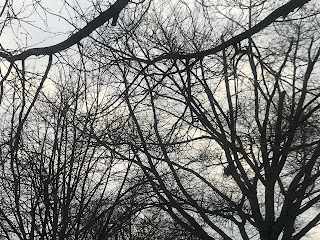 So this is my first pandemic birthday, let’s see if it’s my last. The sun’s pouring through the front window. JNH is watching the pre-class videos for his online class which will start soon. (He’s using the big desk that was Mum’s, and her Dad’s before that, which has “skipped a generation” as he puts it). CMH is on the sofa having his 30 minutes of allocated FIFA-game-on-i-pad time. C is on his morning walk. And I’m writing this with a coffee and a chocolate croissant from Leli’s bakery, which we picked up on our morning “walk to school” round the block. The small details like that have taken on so much more weight this past year when everything is in flux and fragile. Like stepping stones over a river. Down the coast from here the mall and Capitol are pretty much barricaded as DC prepares for the inauguration of Biden as President and Kamala Harris as Vice President tomorrow, with 25,000 national guard troops protecting the area from potential insurrectionary attacks.

The storming of the Capitol on January 6th was not surprising. Disturbing, yes, but not surprising, and for everyone who’s commenting “this is not America”, it totally is – a through-thread that’s been embedded in the country from the days of the colonists alongside the narrative of a trajectory towards a shared ideal. I remember when Biden’s winning was confirmed a few days after the election. Spontaneous celebrations burst out on the streets, including down the road here in Astoria, and it did feel like an elephant that had been sitting on our heads the past few years had just got up, but that was accompanied by a sense that any over-emphasis on restoring “normality” and going “back” to a better time was flawed and dangerous, just as when Trump talks about making America great again. I’m hoping that the next few years sees politics connecting deeply and practically with people - with everyone - where they are at in their lives, drawing lessons from the long-term door to door organizing in Georgia that brought black voters to the polls and flipped the Senate.

Connecting with people where they are at is easier said than done, especially when there’s instant-community-at-the-fingertips on the web. The role of the social media giants in recent election cycles, as they have profited from misinformation – including fanning the myth of a stolen election which will have enormous repercussions over the coming years – is an example of corporate capture of politics to an extreme (another age-old force, though not unique to the US by any means). Time will tell which forms the street landscape and the online landscape take over these coming years, how they relate, and which holds the most sway.

Right, so JNH is now out of his online class, and their (awesome) teacher, who had wanted to stream tomorrow's inauguration for them, said the Department of Education isn't allowing it because there's no knowing what bad things might happen in the middle of it.

Update: Both kids watched anyway on TV and were glued to it.