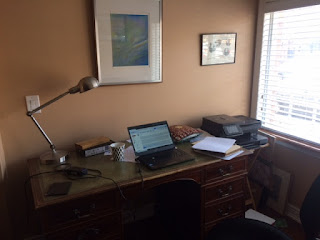 I’m writing this at a very solid wooden desk that my great grandfather had built for my grandfather when he went off to Cambridge University. After my grandfather died, Mum used it as her desk in her little study overlooking their garden – the garden where my sister P and I had played from the ages of 6 and 4, where the enormous oak next door had crashed down unexpectedly one day, and where she loved seeing JNH and CMH playing on our visits to the UK, stocking up on paddling pools and bat-and-ball games in advance.

Mum was organized about what was in each of the desk’s eight drawers. It was there, after retirement, that she’d do her work as chair of the governors for a school, receive and respond to emails from P and I from our various corners of the globe, and keep people connected in the neighborhood and among our family in lovely and specific ways.

I included the desk in a message to her cousins after she died, “distributing” family furniture among relatives. Her cousin C replied that she didn’t want to take the desk, but she had happy memories of it. She remembered it in my grandparent’s house, in a room that was part study and part “cosy space for scrambled egg Saturday night suppers.” When her daughter was born, she stayed in their house for a few weeks and would use the knee-hole space between the drawers as a convenient place to pop the baby in her carry cot when lots of visitors came round.

I pondered the desk on my subway commutes. On one commute I decided that it was ridiculous not to bring it here to New York, for me to use, and for JNH to write at when I’m gone, whenever that may be. (If this year’s taught me anything, it’s that that could be anytime).

So here it is, with me sitting at it.

P helped Dad pack up their house for his move, and so she was there when the guys came to pick up the desk. In the knee-hole space she included a box full of other things – some paintings, and folders of my “stuff” that Mum had kept.

Among them was a baby book and a list, written in her familiar blue ink writing, of my “general progress” from birth. Five weeks saw “first smile,” and “discovered feet”. 20 weeks saw “positive attempts to crawl.” 8 ½ weeks said “Broke leg” (I’d rolled off a changing table), but luckily it seemed to cause only a minor pause in progress, as 9 months 1 week said: “Back to where we were before leg broke.”

One of the paintings I shipped is an old Punch cartoon of four sloths. Three are hanging comfortably upside down from the branches, and one is on top of a branch clinging on with an intense expression. “For heaven’s sake Roger, relax” reads the caption. Roger was my grandfather’s name. I’ve hung it up near the desk as a reminder.

Nothing has felt quite right this Christmas. A “Charlie Brown” local children’s play was pretty rubbish. The “ginger kick” cocktail I introduced Dad to in one of our local bars “The Shady Lady” was way too spicy even for him (laced with jalapenos), so he had to order a different one. CMH decided to have a couple of wild tantrums. Mum wasn’t with us.

She wasn’t, yet in all kinds of ways she was, and that’s what I need to hold on to.